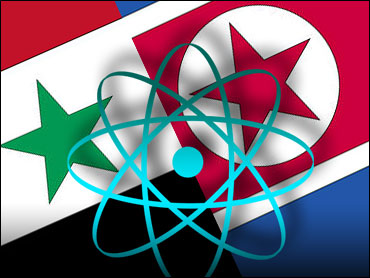 North Korea and Syria held high-level talks Friday in Pyongyang, the North's state media reported, amid suspicions that the two countries might be cooperating on a nuclear weapons program.

The two sides discussed ways of improving friendship and cooperation and other issues of bilateral interest, KCNA said, without elaborating.

Their meeting came amid suspicions that North Korea may be providing nuclear assistance to Syria, a charge both Pyongyang and Damascus deny.

The allegations arose after an alleged Israeli air raid earlier this month on unknown Syrian targets possibly connected to a weapons program.

Andrew Semmel, acting U.S. deputy assistant secretary of state for nuclear nonproliferation policy, said last week that North Koreans were in Syria, and that Syria may have had contacts with "secret suppliers" to obtain nuclear equipment.

Semmel did not identify the suppliers. However, he said that North Koreans were in Syria and that he could not exclude the possibility that the network run by the disgraced Pakistan nuclear scientist A.Q. Khan may have been involved.

U.S. President George W. Bush, when asked at a news conference Thursday about the suspicions that North Korea is giving nuclear assistance to Syria, said, "We expect them not to."