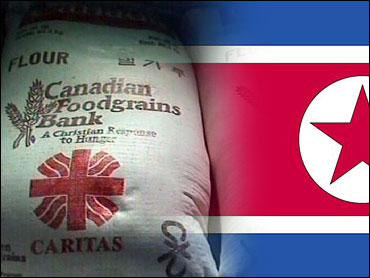 International food aid sent to ease the suffering of North Koreans is being sold on the black market for high prices, according to video footage released Wednesday by Japanese and South Korean human rights activists.

The activists said the footage was secretly taken in September in Haesan, a North Korean town on the border with China.

It showed a marketplace where people were selling rice and other grains that the activists said was provided by South Korea, the U.N. World Food Program and other relief organizations.

Some of the grain sacks bore stamps that read, "Rice from the Republic of Korea," South Korea's official name.

There was no immediate way to independently verify the authenticity of the video footage and the activists' claim.

"The aid has not been used for those who really need it. The aid is helping a regime of terror and dictatorship become stronger," said Lee, whose group is based in Japan.

In a statement, the Seoul-based Network for North Korean Democracy and Human Rights urged the international aid donors to "establish the transparency of the distributing process" in North Korea.

North Korea has depended on outside aid to feed its 22 million people since flood, drought and other bad weather devastated its already inefficient economy in the mid-1990s.

Pyongyang says at least 200,000 people died of famine between 1995 and 1998, but blames the deaths on the economic blockade and sanctions imposed by the United States.

North Korea is engaged in a standoff with the United States and its allies over the North's nuclear weapons programs.

Washington is urging North Korea to abandon its development of nuclear weapons, while North Korea says it will pursue its nuclear programs as a "deterrent" unless the United States agrees to a nonaggression treaty, economic aid and diplomatic ties.