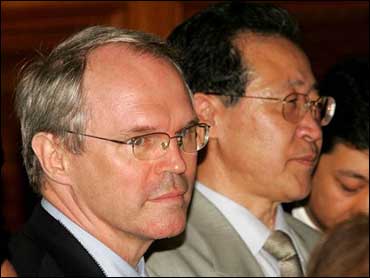 North Korea's envoy to international disarmament talks said Tuesday that his country was ready to work on eliminating atomic weapons from the Korean Peninsula, while the United States reassured the communist nation at the revived negotiations that it has no intention of invading to end the nuclear standoff.

"The fundamental thing is to make real progress in realizing the denuclearization of the Korean Peninsula," North Korean Vice Foreign Minister Kim Kye Gwan said at the opening session of the talks in Beijing.

"This requires very firm political will and a strategic decision of the parties concerned that have interests in ending the threat of nuclear war," he said. "We are fully ready and prepared for that."

In the past, North Korea has said denuclearization of the peninsula also includes removing alleged U.S. nuclear weapons from South Korea. Both Washington and Seoul have denied any such weapons are present.

The talks Tuesday are the fourth such six-nation negotiations, which also include China, Japan, Russia, South Korea and the United States. They are reconvening after a 13-month boycott by the North, which cited "hostile" U.S. policies.

North Korea agreed to return to the talks following a meeting earlier this month between Kim and the main U.S. envoy, Assistant Secretary of State Christopher Hill, who assured the North that Washington recognized its sovereignty.

On Tuesday, Hill repeated those pledges.

"We view (North Korea's) sovereignty as a matter of fact. The United States has absolutely no intention to invade or attack" North Korea, Hill said in his opening remarks.

Unlike the previous rounds, which were scheduled for several days, no end date has been set for this week's resumed negotiations.

Hill said Tuesday his delegation would remain in Beijing "so long as we are making progress in these talks." He has previously said he doesn't expect this round to be the last of the six-nation talks.

"We do not have the option of walking away from this problem," he said.

Hill also said the U.S. would address the North's security and energy concerns after the nuclear issue is resolved.

"Nuclear weapons will not make (North Korea) more secure," he said. "And in fact, on the contrary, nuclear weapons on the Korean Peninsula will only increase tension in the region."

In a nod to Pyongyang, Hill said if North Korea "permanently, fully and verifiably" dismantles its nuclear programs, the U.S. and other countries would offer measures "consistent with the principle of 'words for words and actions for actions."' That principle was contained in a statement at the end of the last round of talks in June 2004 and been repeatedly invoked by North Korea as one of its demands.

The talks are the first in which Hill is representing Washington, and he is believed to have more room for negotiating than his predecessor, James Kelly. In a departure from previous meetings, Hill met his North Korean counterpart on Monday ahead of the official opening of the talks.

The U.S. and North Korea held another meeting later Tuesday after the talks opened, a U.S. Embassy spokeswoman said on customary condition of anonymity. No details of their discussion were released.

Since then, the North has pulled out of the Nuclear Nonproliferation Treaty and taken steps that would allow it to harvest more radioactive materials for atomic bombs. In February, the North publicly claimed it had nuclear weapons, but it hasn't performed any known tests that would confirm it can make them.

At the talks' opening, South Korea's envoy, Deputy Foreign Minister Song Min-soon, repeated Tuesday his nation's offer of massive electricity aid to the North if it agrees to disarm.

In Seoul, South Korean Unification Minister Chung Dong-young told a meeting of the ruling Uri party that discussions on details of the electricity offer to the North could begin as soon as Pyongyang agrees to abandon nuclear weapons. However, he conceded North Korea would likely make a counterproposal to Seoul's offer — which experts point out would effectively place control of the North's power supply in its capitalist rival's hands.

North Korea has demanded aid and security guarantees from Washington in exchange for giving up its nuclear weapons. The United States says it won't offer concessions until North Korea's nuclear weapons program is verifiably dismantled.

Another issue that could complicate the arms talks is Japan's concerns about its citizens abducted by the North.

South Korea's main delegate Song appeared to issue a warning Tuesday to Japan not to derail the negotiations, saying it "would definitely not be desirable to take up issues that would disintegrate the focus of the talks."