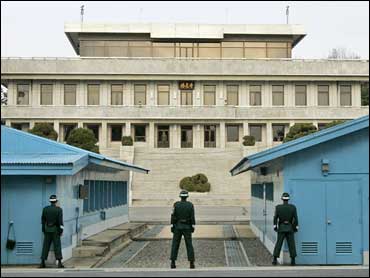 North Korean military officials told South Korean business managers to move their factories out of the North, a report said Friday - a strong sign the regime is serious about shutting down the border in a further deterioration of inter-Korean ties.

The high-level military delegation made the comments during a rare inspection of a joint industrial park in Kaesong last week, South Korea's Chosun Ilbo newspaper reported.

The newspaper quoted a South Korean businessman with a factory in Kaesong who met with government officials Thursday, a day after the North said it would shut its side of the border on Dec. 1.

The joint business complex just north of the heavily fortified border that divides the two Koreas has fueled hopes of reconciliation. Forcing South Korean firms to pull out could further escalate tension on the divided peninsula.

The delegation also told South Korean businessmen that the sprawling complex sits on land belonging to the North Korean military, the newspaper said.

The North's military pulled some of its troops and equipment from Kaesong to clear the way for South Korean firms to set up their factories there in an apparent move to boost cross-border cooperation and earn hard currency. It was a huge concession from the military.

South Korean firms began to set up factories in Kaesong in 2004 at a time of warming relations between the communist North Korean leadership and South Korea's then-liberal administration. But relations have soured since conservative South Korean President Lee Myung-bak took office in February, pledging to get tough with Pyongyang.

On Wednesday, the North's military announced it would "restrict and cut off" cross-border routes starting next month.

Tightening the border primarily would affect South Korean firms that transport raw materials to more than 80 South Korean factories in Kaesong that employ about 35,000 North Korean workers. The complex marries Seoul's technology and management expertise with Pyongyang's cheap labor, and has been a key source of much-needed hard currency for the impoverished North.

South Korea said Thursday that it urged the North not to halt the development of the joint industrial zone seen as a model for joint economic cooperation and a prominent symbol of reconciliation.

The two Koreas technically remain at war because the 1950-53 conflict ended in a truce, not a peace treaty.