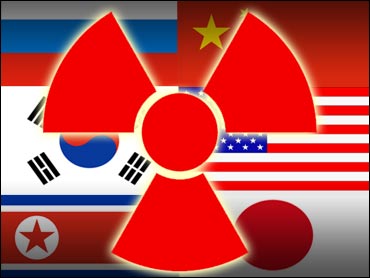 The United States and North Korea held direct talks for the first time in months Wednesday, meeting for a half-hour on the sidelines of a six-nation summit designed to resolve the standoff over Pyongyang's nuclear program.

The South Korean official who confirmed the meeting took place said the North appeared "willing to resolve the nuclear issue through dialogue."

The meeting, held soon after the six-way talks opened Wednesday, was the first concrete sign of progress in six-nation talks designed to resolve the disagreement over the nuclear program — and to ensure security for the East Asian region. China, Russia, Japan and South Korea are also participating in the three days of meetings.

The heads of the U.S. and North Korean delegations participated in the one-on-one talks, said Wie Sung-rak, director-general at the South Korean Foreign Ministry's North American Affairs Bureau. The meeting came hours after the North Korean government reiterated its insistence that the United States agree to a nonaggression treaty.

"The U.S. side made comments about easing North Korea's security concerns, but I cannot give you any more details," Wie said. "From what North Koreans said during the meeting, we could read that North Korea is willing to resolve the nuclear issue through dialogue."

The contact between the delegations ended a diplomatic drought between the two nations, at odds over the nuclear program and U.S. demands that it cease immediately. Pyongyang demands guarantees of security and economic aid as conditions for doing so.

Earlier, when the full six-nation talks convened, the two nations' top envoys at the session — U.S. Assistant Secretary of State James Kelly and North Korean Deputy Foreign Minister Kim Yong Il — shook hands and smiled before sitting alongside the other participants around a vast hexagonal table behind the high brick walls of the Chinese government's state guest house.

The North Korean government had long demanded one-on-one talks with the United States, but dropped its objections to the multilateral arrangement after Beijing — a longtime Pyongyang ally and communist neighbor — agreed to host it.

North Korea repeated its demand for the nonaggression pact from the South's key ally — the United States — saying it would not give up its "nuclear deterrent force" for anything less than that.

The discussions are expected to continue until Friday as part of a process experts say may be drawn-out — but is inching in the right direction.

The dispute began last year when North Korea told a U.S. envoy it was trying to process uranium. The U.S. cut off fuel shipments, and North Korea kicked out international inspectors and said it would ignore the Nuclear Nonproliferation Treaty.

The North vowed to restart a dormant plant for processing spent fuel rods into plutonium. Pyongyang is already believed to have one or two nuclear devices and could produce five to six more in a few months.

The North has given several rationales for resuming nuclear development. It says it needs nuclear weapons to allow it to defend itself while reducing its million-man conventional army. The North also claims to feel threatened by the U.S. doctrine of preemptive war.

The participants' interests go beyond simply wanting to keep the isolated communist North from becoming a nuclear threat.

South Korea wants to clear an obstruction from its policy of reconciliation with Pyongyang. China hopes to avoid being dragged into a conflict between its longtime ally, North Korea, and a vital trading partner, the United States. The North, faced with economic collapse, wants more food and humanitarian aid.

Japan wants progress on the issue of Japanese citizens kidnapped by the North during the Cold War, and its delegation brought up that issue in the first session Wednesday — despite warnings by North Korea not to.