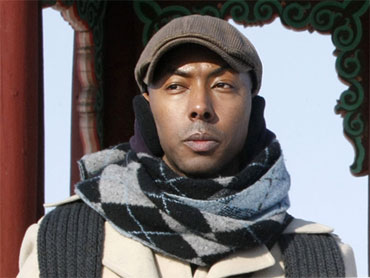 North Korea said Friday an American imprisoned for illegally entering the reclusive country has tried to kill himself.

Aijalon Mahli Gomes, from Boston, attempted to commit suicide and is being treated at a hospital, the North's official Korean Central News Agency said, citing information from "a relevant" government entity.

KCNA said the attempt was "driven by his strong guilty conscience" and despair that the U.S. government has not tried to gain his freedom.

The brief dispatch also said the Swedish Embassy in Pyongyang was aware of his condition. The U.S. and North Korea do not have diplomatic relations, and Sweden handles Washington's interests in the country.

In Stockholm, the Swedish Foreign Ministry declined to comment, referring queries to the U.S. State Department.

Gomes was sentenced in April to eight years of hard labor and fined $700,000 for entering the country illegally and for an unspecified "hostile act."

Thaleia Schlesinger, a spokeswoman for Gomes' family, said she had not heard the news and was unsure if the family had. "I am sure they will be concerned," she said. "Who wouldn't be?"

The reported suicide attempt came weeks after North Korea threatened to increase punishment for Gomes amid tensions over the sinking of a South Korean warship that Seoul and Washington have blamed on Pyongyang.

KCNA reported in June that the North was examining what harsher measures to take against Gomes under a wartime law, and would be compelled to consider applying the law if the U.S. persisted in its "hostile approach."

North Korea has freed three other Americans detained for illegal entry, but ruled out Gomes' release amid the ongoing tensions.

On Friday, the U.N. Security Council approved a statement condemning the sinking of the South Korean warship without directly blaming North Korea.

The North denies it was responsible and has warned that any punishment would trigger war.

Kim Yong-hyun, a professor of North Korean affairs at Seoul's Dongguk University, said the KCNA report was a signal that North Korea wants the U.S. to resolve the issue by holding talks.

"North Korea is pressing the U.S. to come forward to a bilateral meeting to try to deflect the pressure it faces over the ship issue and move the atmosphere toward dialogue and (a resumption of) six-nation talks on the North's nuclear programs," Kim said.

Gomes's motivation for entering North Korea is unclear. He had been teaching English in South Korea before being arrested in the North on Jan. 25.

In late April, he was allowed to speak to his mother by telephone.

Gomes had attended rallies in Seoul in support of Robert Park, a fellow Christian who crossed into North Korea from China to call attention to the North's dismal human rights record.

Park was expelled from North Korea about 40 days after entering the country last Christmas.

American journalists Laura Ling and Euna Lee were freed last August during a trip to North Korea by former President Bill Clinton after being held for five months for illegally entering the North.
By Associated Press Writer Kwang-Tae Kim; AP writers Malin Rising and Mark Pratt contributed to this report