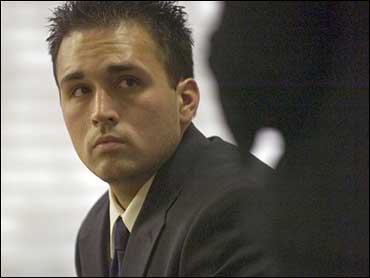 A jury found former Northern Colorado backup punter Mitch Cozad guilty of second-degree assault Thursday in a stabbing attack on the starter, but acquitted him of attempted first-degree murder.

Cozad was accused of attacking Rafael Mendoza in a desperate bid to get the starting job. The defense argued it was another student who attacked Mendoza.

The assault charge carries a penalty of up to 16 years in prison.

Cozad, who did not testify, shook his head as the verdict was read. He was taken from the courtroom in handcuffs to await his sentencing on Oct. 2.

Mendoza stared at Cozad but said nothing.

Mendoza was attacked last Sept. 11 outside his apartment in Evans, a small town adjacent to Greeley. He testified he could not see who attacked him. He was left with a deep gash in his kicking leg but later returned to the team.

Jurors returned their verdict shortly after 10 a.m. after starting deliberations Wednesday morning. Testimony covered five days, most of that taken up by prosecution witnesses.

The defense called only three witnesses.

Shortly before stopping for the day Wednesday, jurors sent District Judge Marcelo Kopcow a note asking, "Does intent to cause death need to be present or can it come later?"

After conferring with prosecutors and the defense, Kopcow sent a reply that did not directly answer the question: "The court has supplied the jury with all the applicable law you must apply in reaching your verdict."

The question apparently troubled Cozad. He has been stoic for most of the trial but appeared shaken after Kopcow announced his response and left the courtroom. The jury was not present at the time.