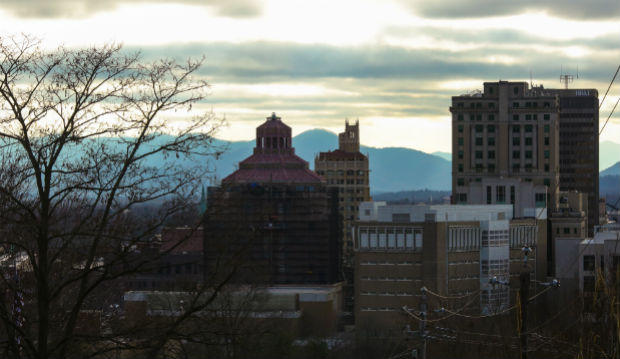 ASHEVILLE, N.C. - Police in a North Carolina city say they want to know who turned over video of a white officer beating a black man to a newspaper, along with a memo about the case.

Asheville police Chief Tammy Hooper told the Asheville Citizen-Times that the release of the memo and the video was illegal, and warrants an investigation.

The August 2017 police body cam footage, released by the Citizen-Times last Wednesday, shows an officer beating a black man who he had stopped twice for jaywalking.

"I've got two options. I can either arrest you or write you a ticket," the officer says.

The officer and his partner moved to arrest the man, Johnnie Jermaine Rush, who ran. As they chased him, one officer yelled, "you're going to get f---ed up hardcore."

They catch Rush, place him face down on the ground, and repeatedly tell him to put his hands behind his back. He yells, "I can't breathe," while an officer presses against his head and neck. As he tries to lift his head, one of the officers, identified later as Chris Hickman, punches him at least seven times in the head and face. The camera then moves off of Rush, who can be heard yelling in pain, apparently being Tased.

One of the officers then makes a call over the radio, saying "his face, tasing....just get EMS." When they arrive, he says "I've got blood all over me from his face."

Police Chief Tammy Hooper on Thursday issued an apology to Rush for the beating. Hickman has resigned, and the D.A. may press charges, reports CBS North Carolina.

Body camera footage is not public record. District Attorney Todd Williams criticized the release of the information to the Citizen-Times, and backed an investigation. It's not clear if the investigation has started.

"The extrajudicial release of evidence in this case prior to the completion of the investigation, such as the body cam video, risks compromising a potential future prosecution of involved officers and may require its own independent investigation," Williams said in a news release.

City officials and community leaders, who first learned of the Aug. 24 incident through the Citizen-Times story, said they were outraged at the beating and that police had not notified them about it or the ongoing police investigation.

Hickman is a decorated 10-year department veteran who was transferred from the patrol division to detective in 2014, the same year he received an medal of honor. On Jan. 14, 2017, he was transferred back to patrol.

He resigned Jan. 5, 2018. He didn't respond to repeated emails and phone calls from the newspaper, the Citizen-Times reported.

City Council member Sheneika Smith said state law about who can see body camera video is too restrictive. Leaders of local governments need to see the videos when there are allegations of excessive force and possible litigation, Smith added.

"When things get out of hand, who's gonna protect our citizens? At the end of the day that's the real focus," she said.

Dewana Little, appointed by City Council to lead the formation of a human relations commission, said review could be done by committees that focus on equity issues and police relations.

"There are all these hurdles to viewing the footage," Little said. "What is the point if we can't hold them accountable for things on the body cams?"