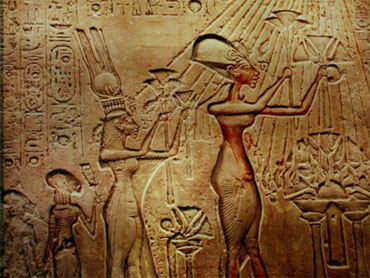 The DNA tests that revealed how the famed boy-king Tutankhamun most likely died solved another of ancient Egypt's enduring mysteries - the fate of controversial Pharaoh Akhenaten's mummy. The discovery could help fill out the picture of a fascinating era more than 3,300 years ago when Akhenaten embarked on history's first attempt at monotheism.

During his 17-year rule, Akhenaten sought to overturn more than a millennium of Egyptian religion and art to establish the worship of a single sun god. In the end, his bold experiment failed and he was eventually succeeded by his son, the young Tutankhamun, who rolled back his reforms and restored the old religion.

No one ever knew what became of the heretic pharaoh, whose tomb in the capital he built at Amarna was unfinished and whose name was stricken from the official list of kings.

Two years of DNA testing and CAT scans on 16 royal mummies conducted by Egypt's Supreme Council of Antiquities, however, gave the firmest evidence to date that an unidentified mummy - known as KV55, after the number of the tomb where it was found in 1907 in Egypt's Valley of the Kings - is Akhenaten's.

The testing, whose results were announced last month, established that KV55 was the father of King Tut and the son of the Pharaoh Amenhotep III, a lineage that matches Akhenaten's, according to inscriptions.

KV55 had long been assumed to be too young to be Akhenaten, who was estimated to be in his 40s at the time of his death - but the testing also established the mummy's correct age, matching the estimates for Akhenaten.

"In the end there was just one solution for this genetic data fitting into the family tree and this showed us this must really be Akhenaten and could not be any other," said Albert Zink, director of the Institute for Mummies and the Iceman at the European Academy in Bolzano, Italy, who worked on the project.

Now experts are planning more tests to uncover further details about Akhenaten's royal family. The new attention could also give a push to a planned new Akhenaten museum that will showcase his mummy near Amarna, his capital midway down the Nile in what is now the province of Minya, 135 miles (220 kilometers) south of Cairo.

In one tantalizing discovery, the testing established that another unidentified mummy was Akhenaten's sister, that he fathered Tutankhamun with her and that she appears to have died from violence with blows to her face and head.

Still elusive is Nefertiti, the chief wife of Akhenaten famed for her beauty. Egypt's antiquities chief, Zahi Hawass, has said one of his goals is to track down her mummy.

"The Amarna period is like an unfinished play," Hawass said at the February press conference announcing the new discoveries. "We know its beginning but have never succeeded in discovering its end."

The discovery of Akhenaten's remains lay to rest longtime speculation over his physical appearance. Royal statues of the time show an effeminate figure with womanly hips, elongated skull and fleshy lips - leading to speculation he suffered from any number of rare diseases that distorted his body.

But the mummy and DNA tests showed a normally shaped man without genetic conditions that might given him both masculine and feminine features.

"It ought to dampen down some of the more dramatic interpretations," said Barry Kemp, who has been working on the Amarna excavations since 1977. "But people do love a good story."

Jerome Rose, of the University of Arkansas, who has been working on the site with Kemp, said the discovery "makes our work at Amarna of greater interest."

What the discovery does not resolve, however, is the mystery of how Akhenaten died. Unlike Tutankhamun's well preserved mummy, which showed he suffered from congenital defects and malaria, Akhenaten's remains are little more than bones with no soft tissues to provide clues to his death.

In fact, the difference in preservation between his skeleton and all the other royal mummies could have been due to his different religious beliefs or animosity by those burying him.

"I think it's another evidence that it really could be Akhenaten; he was treated differently, not in the same way as the other mummies," said Carsten Pusch, of the Institute of Human Genetics in Tubingen, who also worked on the project.

For most of world, King Tut embodies ancient Egypt's glory, because his tomb was packed to the brim with the glittering wealth of the rich 18th Dynasty (1569-1315 B.C.). But Tut was in fact a minor king.

Akhenaten's reign, which began around 1350 B.C., was far more momentous.

He broke with the powerful priests of Amun, Egypt's chief god, repudiated Egypt's many deities and ordered the worship of the sun disk, Aten. He moved his court to his new capital at Amarna, which grew to some 30,000.

Along with the religious revolution, he oversaw a dramatic change in Egyptian art, promoting a naturalist style at odds with the rigid conventions and stiff tomb paintings with which the world is familiar. In one example of the exuberant new style, remnants of a painted gypsum floor from the palace show colorful ducks exploding out of a riot of Nile reeds.

But after his death, he was purged by his successors and remained unknown to the world until the discovery in the 19th century of his royal city at Amarna - one of the only existing ruins of an ancient Egyptian city, rather than just a temple or tomb.

For a Victorian Europe already fascinated by the flood of discoveries in Egypt, news of a monotheist centuries ahead of his time seized the public's imagination. Theories have swirled over Akhenaten's legacy, with some like Sigmund Freud even speculating he may have influenced Judaism, a theory that, while discounted, has been remarkably enduring.

Unlike the animal and man-shaped deities of Egypt, Akhenaten's cult took a step toward worshipping something more abstract.

"He was prepared to believe only in the supernatural source of power that he could see with his own eyes, the disc or orb of the sun," said Kemp.

Akhenaten also set forth a new moral code. "His courtiers praised him for teaching them to distinguish between right and wrong, and I think it likely that he wrote a treatise of moral guidance that has not survived," he added.

The discovery of Akhenaten's body could be a boon to Minya, one of the poorer provinces in Egypt - quintessential "flyover" territory, skipped by tourists heading straight from the Giza pyramids outside Cairo to the temples of Luxor in the south, where the Valley of the Kings is located.

The museum in Minya will house the mummies of Akhenaten, his mother Queen Tiye and his ill-fated sister-consort and "tell the story about Akhenaten," Hawass said.

Amarna's ruins were once a regular stop for cruise boats steaming south from Cairo. But an insurgency by Islamist militants during the 1990s drove the tourists away and few have returned more than a decade after it was crushed.

The city's modest hotels still bear faded 1980s-era tourist posters touting the area as the "cradle of monotheism," with an image of Akhenaten.

Kemp says the occasional tour group does pass through to see the extensive Amarna ruins - most of them New Age-style pilgrims coming from as far away as Croatia and Brazil.

"There is a definite Akhenaten fan club. I am intrigued by the existence of those who make a spiritual pilgrimage to Amarna," said Kemp.