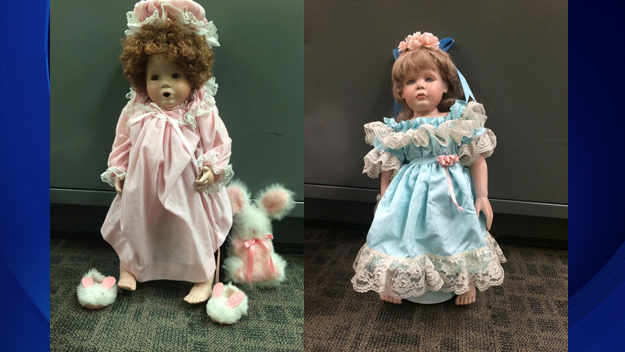 SAN CLEMENTE, Calif. -- Deputies investigating the appearance of 10 porcelain dolls placed on the front porches of several families in the Talega area found out Thursday evening that the gesture was meant to be nice, not creepy, CBS Los Angeles reported.

According to the Orange County Sheriff's Department, about eight families noticed the dolls over the past week and were concerned due to the close resemblance the dolls have with their 10-year-old daughters.

Officials initially were not sure if this is a prank or something more sinister, but they are addressing the underlying fear that there may be a motive against children in the area.

"People are saying the dolls slightly resemble their daughters, which is creepy," Lt. Jeff Hallock said. "There doesn't appear to be an obvious pattern to who has been targeted either."

Talega is a housing community in the east end of San Clemente, where parents report that some of the girls are connected through school or activities they participate in, authorities said.

She spoke with a mother who received one of the dolls and said her daughter was upset over receiving one.

"We're very unsettled and obviously taking this very seriously as it concerns our daughters and little girls," said the mom who didn't want her face to appear on camera.

When she first received the doll, she told Hopper, she thought it was a prank until she heard some neighbors also got them.

Another neighbor told her: "It leaves an impression on your kid. Can you imagine your daughter getting that? It would freak me out, too," said Heidi Colburn.

Said another mom: "We're a little concerned. It's creepy!"

Officials told Hopper Thursday evening that the mystery has been solved.

A well-meaning woman who knows the families and attends church with them thought leaving the dolls would be a kind gesture of friendship.

In a statement Thursday, Hallock added, "Investigators have concluded that [the neighbor's] motivation was out of goodwill and that she intended it as a kind gesture."

He added: "There will be no further investigation of this case."