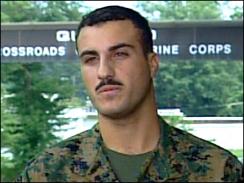 A U.S. Marine who disappeared in Iraq and turned up in Lebanon three weeks later, said Monday that he did not desert.

Cpl. Wassef Ali Hassoun told reporters at a Marine base in Virginia that he was captured. Hassoun vanished June 20 from his base near the troubled Iraqi city of Fallujah and reappeared earlier this month at the U.S. Embassy in Beirut.

"I did not desert my post," he told reporters outside Quantico Marine Corps Base. "I was captured and held against my will by anti-coalition forces for 19 days. This was a very difficult and challenging time for me."

He did not answer any questions during his brief appearance. He was joined by his brother, who had recently arrived at Quantico from Utah.

It remains unclear how the Marine translator traveled from Iraq to Lebanon. The Navy has said it is investigating whether the kidnapping might have been a hoax.

Hassoun is in the midst of what the Marines call a "repatriation process" in which he is debriefed and given time to decompress and avoid the media spotlight, Marine Corps officials said.

Hassoun arrived at Quantico Friday after six days of medical evaluation at a military hospital in Germany. Marine officials said it may be weeks or month until Hassoun completes the "repatriatrion" process and returns to active duty.

Hassoun, 24, of West Jordan, Utah, was missing since June 20 from his base near the troubled Iraqi city of Fallujah before turning up unharmed at the U.S. Embassy in Beirut July 8. It remains unclear how he traveled from Iraq to Lebanon, where he was born and still has some relatives.

On June 27, Arab television showed a videotape of Hassoun with his eyes covered by a white blindfold and a sword hanging over his head.

During the three weeks he was missing, various conflicting reports emerged about Hassoun - first that he was kidnapped and beheaded, then that he was alive. There were suggestions it was all a hoax.

At one point during his disappearance, a group claiming to represent his captors falsely claimed that he had been beheaded after being lured from the base by a love affair.

The Navy is investigating whether the kidnapping might have been a ruse. But the Naval Criminal Investigation Service is not expected to question Hassoun until his repatriation procedure is completed, the Marine Corps said.

A Marine spokesman said the facts are still being gathered. Until then, he says, the Marines are supporting Hassoun in his efforts to return to active duty.

Lt. Col. David Lapan, a Marine Corps spokesman, said Hassoun will continue to go through the "repatriation" process until it is determined he is fit and capable of returning to normal duty. He said the process could take from weeks to months.