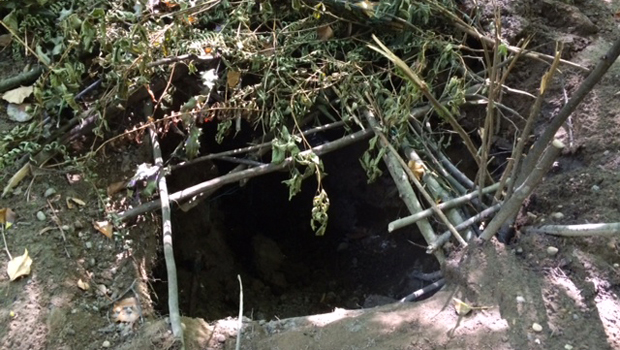 SEATTLE -- Residents of one Seattle neighborhood have long complained about a man digging up massive ditches on city parkland, CBS affiliate KIRO-TV reports.

"They call him the moleman," said Ed Newbold, who lives in the Beacon Hill area. "He has a fear of what he calls noxious weeds, and he's dug up about half-acre of the area."

Newbold said he's complained to the city about the problem for at least four years, showing emails and even a blog documenting the digging.

"They are ignoring their own responsibility," Newbold said. "As stewards of this land, they should be doing something about it."

Not only has "the moleman" dug up some pretty significant ditches, but he's also created steps people can walk up and down and even an irrigation system.

City parks staff looked for the so-called moleman, also known as "James," to write a no-trespass order, but no one could find him.

A sign is also posted to tell anyone who camps there that all of their belongings will be removed.

"It's not only unsightly," said Newbold. "It's doing real damage to the area."

As for why it's taken so long to get parks staff and officers to stop the digging, a parks spokesperson said the city asked James to leave before, but he kept coming back.

Since the digging couldn't be stopped, the city will have to fill in the land, which is work the city estimates could cost taxpayers tens of thousands of dollars.