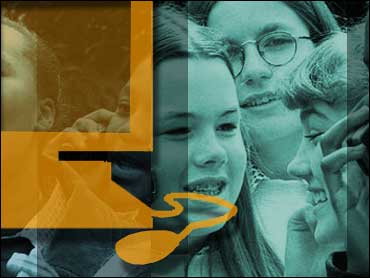 It all started on the social networking Web site MySpace.com. A 14-year-old girl began receiving graphic messages from a much older man, asking whether she was "OK with me being 38?"

It wasn't the first time the alleged predator, Robert Wise, trolled the Internet looking for sex, according to Sgt. Dan Krieger of the League City, Texas, police department. But this time, reports CBS News Correspondent Sandra Hughes, the authorities stepped in.

"We assumed her online identity and started chatting with this guy," Krieger explains. "During that point, he made it very clear he wanted to meet her for sex. We were able to find another 14-year-old female that he's actually had sex with."

Wise is now in custody, charged with multiple counts of sexual assault.

But the incident is just one of many cases nationwide — and some of them have ended tragically.

In New Jersey, Majalie Cajuste is grieving the murder of her daughter Judy. The 14-year-old reportedly told friends she met a man in his 20s through MySpace.com.

Across the country, in Northern California, friends are mourning 15-year-old Kayla Reed. She was active on MySpace until the day she disappeared.

Police are investigating possible MySpace connections in both murder cases.

The Center for Missing and Exploited Children reported more than 1,200 incidents last year of adults using the Internet to entice children. With numbers like that, you'd think parents would be hovering over their kids, wanting to know what they're doing online. But authorities say many parents are clueless about their kids' MySpace profiles.

CBS News Technology Analyst Larry Magid had a look at one personal profile on the site, belonging to a 15-year-old girl.

"Now if you were a predator and you read something like that," asks Hughes, "what would it tell you about this young lady?"

"I'd target her, I think," Magid replies.

Read more of Magid's reporting on MySpace.com, including protection tips for parents.
In talking to some teens who regularly use MySpace, it's easy to see that a lot of kids aren't very careful about the information they put on their pages.

"So many people don't even use common sense," says Katie Pirtle, a high school student. "Some people even put their phone number on there."

And while they information kids put on MySpace may be intended for their friends, do they think, "Hey there's 35-year-old or 45-year-old guys out there looking at my site?"

"Definitely not," says April Ehrlich, another high school student. "When they think MySpace, they think other teenagers. They don't think there are adults pretending to be teenagers on there."

A lot of MySpace users post "the survey," which asks for responses about issues like drinking, drug use and skinny dipping. Users can also put up pictures.

MySpace declined CBS News' request for an interview. The site warns users not to post any "personally identifiable" material — but the teens we spoke to say that advice is routinely ignored.

"Just like a car accident, it can happen to you," says high school student Julia Rinaldi. "Predators can come to you — and that's what they don't think when they post those things."

Those predators include men like 26-year-old Jeffrey Neil Peters, who was arrested last month for sexually assaulting Susie Granger's daughter. Granger says parents should keep their kids off the site.

"Please don't allow your children to go onto MySpace," she says. "It's a very unsafe environment for them to be in."

But for the thousands of teens who are hooked on the site, it's a warning that's lost in cyberspace.