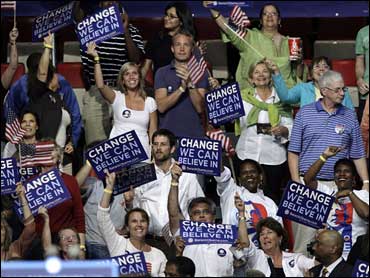 Two Muslim women at Barack Obama's rally in Detroit on Monday were barred from sitting behind the podium by campaign volunteers seeking to prevent the women's headscarves from appearing in photographs or on television with the candidate.

The campaign has apologized to the women, both Obama supporters who said they felt betrayed by their treatment at the rally.

"This is of course not the policy of the campaign. It is offensive and counter to Obama's commitment to bring Americans together and simply not the kind of campaign we run," said Obama spokesman Bill Burton. "We sincerely apologize for the behavior of these volunteers."

Building a human backdrop to a political candidate, a set of faces to appear on television and in photographs, is always a delicate exercise in demographics and political correctness. Advance staffers typically pick supporters out of a crowd to reflect the candidate's message.

When Obama won the North Carolina primary amid questions about his ability to connect with white voters, for instance, he stood in front of a group of middle-aged white women waving small American flags. On the Republican side, a Hispanic New Hampshire Democrat, Roberto Fuentes, told Politico that he was recently asked, and declined, to contribute to the "diversity" of the crowd behind Sen. John McCain at a Nashua event.

But for Obama, the old-fashioned image-making contrasts with his promise to transcend identity politics and to embrace all elements of America. The incidents in Michigan, which has one of the largest Arab and Muslim populations in the country, also raise an aspect of his campaign that sometimes rubs Muslims the wrong way: The candidate has vigorously denied a false, viral rumor that he himself is Muslim. But the denials seem to some at times to imply that there is something wrong with the faith, though Obama occasionally adds that he means no disrespect to Islam.

"I was coming to support him, and I felt like I was discriminated against by the very person who was supposed to be bringing this change, who I could really relate to," said Hebba Aref, a 25-year-old lawyer who lives in the Detroit suburb of Bloomfield Hills. "The message that I thought was delivered to us was that they do not want him associated with Muslims or Muslim supporters."

In Detroit on Monday, the two different Obama volunteers - in separate incidents - made it clear that headscarves wouldn't be in the picture. The volunteers gave different explanations for excluding the hijabs, one bluntly political and the other less clear.

In Aref's case, there was no ambiguity.

That incident began when the volunteer asked Aref's friend Ali Koussan and two other friends, Aref's brother Sharif and another young lawyer, Brandon Edward Miller, whether they would like to sit behind the stage. The three young men said they would, but mentioned they were with friends.

The men said the volunteer, a twenty-something African-American woman in a green shirt, asked if their friends looked and were dressed like the young men, who were all light-skinned and wearing suits. Miller said yes, but mentioned that one of their friends was wearing a headscarf with her suit.

The volunteer "explained to me that because of the political climate and what's going on in the world and what's going on with Muslim Americans, it's not good for [Aref] to be seen on TV or associated with Obama," said Koussan, who is a law student at Wayne State University.

Both Koussan and Miller said they specifically recalled the volunteer citing the "political climate" in telling them they couldn't sit behind Obama.

"I was like, 'You've got to be kidding me. Are you serious?'" Koussan recalled.

Shimaa Abdelfadeel's story was different. She'd waited on line outside the Joe Louis Arena for three hours in the sun and was walking through the giant hall when a voluteer approached two of her non-Muslim friends, a few steps ahead of her, and asked if they'd like to sit in "special seating" behind the stage, said one friend, Brittany Marino, who, like Abdelfadeel, is a recent University of Michigan graduate who works for the university.

When they said they were with Abdelfadeel, the volunteer told them their friend would have to take the headscarf off or stay out of the special section, Marino said. They declined the seats.

After recovering from the shock of the incident, Abdelfadeel went to look for the volunteer and confronted her minutes later, she said in an e-mail interview with Politico.

"We're not letting anyone with anything on their heads like baseball [caps] or scarves sit behind the stage," she paraphrased the volunteer as saying, an account Marino confirmed. "It has nothing to do with your religion!"

In most work and school settings, religious dress - such as Jewish yarmulkes, Sikh turbans, Muslim hijabs - is permitted where secular clothing like baseball caps is not.

"The scarf is not just something she can take off - it's part of her identity," said Marino.

Photographs of the event also show men with hats in the section behind Obama and former Vice President Al Gore, though not directly behind the candidate.

She was "let-down that the Obama campaign continously perpetuates this attitude towards Muslims and Arabs - as if being merely associated [with] one is a sin."

The two women's friends who witnessed the incidents were disappointed too. Aref's friend Miller said he was "shocked" by the contrast between Obama's message and their experience.

"He was the one candidate who you would expect to stand up for something like that - and behind the scenes you have something completely contrary to what he was running on," said Koussan, Aref's other friend.

Aref and her friends complained to the campaign, and after those complaints and an inquiry from Politico, Obama's director of advance, Emmett S. Beliveau, called her to apologize.

An Obama aide also noted that the campaign has no policy against the candidate's appearing with women in headscarves: The next morning at Wayne State University, Obama posed for a picture with a student wearing a hijab.

Photographs from a Seattle rally earlier this year also clearly show a couple in Muslim clothes behind the candidate.

The administrator of the "Muslims4Obama" group on Obama's website, which is not a formal part of the campaign, also said she had "not heard anything regarding Muslim supporters being steered away from sitting behind Sen. Obama at the event," and noted that he had Muslim supporters present at events in Minnesota, including one at which he stood with a Muslim member of Congress, Keith Ellison.

Aref said she was glad Obama had apologized, but she was not entirely satisfied.

"I think this is a much bigger deal than maybe they're perceiving it as," she said, noting that Obama had placed a personal call to a television reporter he'd dismissively called "Sweetie."

"An apology from him personally would be better," she said, then reconsidered. "If they are true to their word, I think it would suffice to have an invitation to their next rally and have seats behind him and show up on TV."