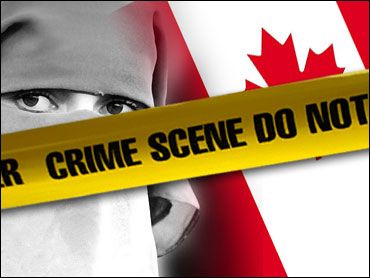 Aqsa Parvez would leave home each morning wearing track pants and a Muslim head scarf. Once the 16-year-old got to school, she would remove the scarf and change into close-fitting jeans.

But, her friends said, her parents got wind of what she was doing. Parvez soon began showing up at school with bruises on her arms.

It was a struggle that may have led to Parvez's death this week at the hands of her father, who was denied bail Wednesday after being charged with strangling her.

The killing has ignited a debate in Canada about the conflict between first- and second-generation immigrants who struggle to maintain traditional Muslim values and their children's desire to fit into Western culture. Canada has about 750,000 Muslims.

Parvez, whose family is of Pakistani origin, was rushed to the hospital in critical condition Monday after her father made an emergency call in which he claimed to have killed her, police said. She later died.

Police spokesman Wayne Patterson said authorities were working at determining the motive and refused to confirm it was over the hijab, the traditional Muslim head scarf. A lawyer for the father said there was "more to the story than just cultural issues."

But friends said Parvez was planning to leave home in Mississauga, Ontario because of tensions with her family over her decision to stop wearing her head scarf at high school. They said she often had bruises and that she predicted days before her death that her father would "kill her."

"Her dad would want her to be about Muslim this, Muslim that, but she was more about living her life to the fullest. She just wanted to show her parents that you could be religious, but also be who you wanted to be," said Alex Prasad, a friend and fellow student at Parvez's suburban Toronto school, Applewood Heights Secondary School.

According to her friends, Parvez wore the hijab when she started school at Applewood Heights last year. But after getting teased about the head scarf, she stopped wearing it a few months ago.

"Her parents would follow her to school or her sisters would and then go home and tell her parents what she was wearing," said Joel Brown, 17. "They'd come to the backdoors, just to spy up on her. Aqsa was always afraid of them, especially her brother who she'd sometimes see walking towards her, and she'd have to scramble to put her hijab back on."

Brown said he was getting worried because Parvez would show up at school with bruises on her arms, possible signs of abuse at home that other friends had noticed as well.

The tension with her family had become too much for Parvez, who left home on several occasions. In the days before her death, she had been staying with a friend, Krista Garbutt. She was returning home last weekend to collect some belongings to move out for good, said Brown.

Brown said Parvez told him she was afraid of going home Friday because her father would "kill her." He said he thought she was speaking figuratively.

"She was scared," Brown said. "But students often talk like that so I thought I'd see her the next day. I didn't expect her never to return to school."

An autopsy revealed that the cause of death was "neck compression," or strangulation, police said Wednesday.

Muhammed Parvez, a frail 57-year-old cab driver, appeared unemotional during his brief appearance at a Brampton court. He was ordered not to communicate with his son Waqas, 26, who was charged with obstructing police in connection with the girl's death.

A publication ban was imposed on the court proceedings.

But outside the courtroom, the father's other son, Sean Muhammed Parvez, told reporters he was not sure what exactly led to his sister's death.

"We don't know so far, we are upset," he said, adding that his mother was "sick" because of what happened.

"It's clearly a tragedy," he said. "You've got a sister that's gone and a father and brother in jail."

"We've heard what's being said in the newspapers and her friends about the cultural problems at home. From my brief discussions with the family, there's more to this story than just the cultural issues, which could play a part," Ciraco said.

Selma Djukic, a spokeswoman for the Canadian Council on American-Islamic Relations, called it a case of domestic abuse.

"This is a tragedy. This is another woman that has succumbed to domestic violence and we need to look at what kind of services are available to families who are immigrants and who are trying to make it in the Canadian framework," Djukic said.

"To say it was about her not wearing the hijab, I think that's an oversimplification. All we've heard is from her peers saying that," Siddiqui said. "Many of us who have teenagers or had teenagers know this is a very difficult time. Their hormones and emotions are raging and they are trying to assert their independence."