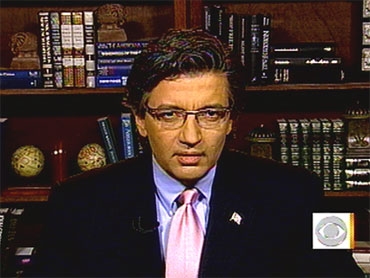 A respected Muslim scholar has a message for those planning to build an Islamic center near Ground Zero in New York: It's a bad idea, and a window on sharply differing thinking among Muslims worldwide on how to best go about promoting Islam - and peace.

Dr. Zuhdi Jasser, president of the American Islamic Forum for Democracy, in Phoenix, a former Muslim U.S. Navy Commander, wrote an op-ed in the Wall Street Journal Friday sharply critical of the planned Islamic center, urging organizer Imam Feisal Abdul Rauf and Muslims all over the world to show compassion and understand the American separation of church and state.

Jasser says the Islamic Center as conceived is more about making a political statement that will seriously divide communities than about bringing them together.

He wrote, "We Muslims should first separate mosque and state before lecturing Americans about church and state." He continues, "American freedom of religion is a right, but … it is not right to make one's religion a global political statement with a towering Islamic edifice that casts a shadow over the memorials of Ground Zero. … Islamists in 'moderate' disguise are still Islamists. In their own more subtle ways, the WTC mosque organizers end up serving the same aims (as) separatist and supremacist wings of political Islam."

On "The Early Show on Saturday Morning," Jasser regarded the rallies being planned at Ground Zero, for and against the center, and said he thinks, "Today is especially a day, as we remember and reflect upon 9/11 and looking over that pit of devastation there and feeling that, today, we look through that lens as Americans, not as a Muslim, not as of any faith. I don't look through this lens of trying to repair my - trying to promote Islam. It's about fighting the forces that caused this, and I think, if we're able to unite under that, that's why 71 percent of Americans are against (the Islamic center).

"It's not because they don't want mosques there, there [are] even other mosques closer. Many of us have built over 2,000 mosques in the United States with very little problem. But, I think what unites us is the freedoms and liberties our Constitution gives us, and it's time for Muslims to look less about promoting ourselves, (have) less of a victimology and (be) more about feeling the pain of the families of 9/11 and understanding what we have to do to repair the house of Islam."

Still, Jasser told anchor Chris Wragge he "absolutely" doesn't think America has become Islama-phobic since 9/11. "I think we're getting a crash course on Islam," Jasser observed, "and we Muslims have to do more work to separate spiritual Islam of the faith we love from political Islam that creates the (accused Fort Hood gunman) Nidal Hasans ... and has a continuum from moderate to radical. That's what we have to do to separate them. And there's some confusion, there, understandably, because it's not a binary equation of good Muslim-non-violent, bad Muslim-violent There's a continuum that's confusing. But that is some part of the educational process, part of the war of ideas we have to fight within. This isn't a fight between Islam and Christianity or Islam and the West. It's a fight within the house of Islam we need to focus on, not just focus on victimology."

Jasser blasted the would-be Quran (Koran)-burner, the Rev. Terry Jones, saying, Book-burning has never been anything that's been followed by anything good in history. Book burning is something that is clearly against the Constitution and the First Amendment, and shows a complete disrespect. And he's a speck of humanity of just 30 congregants and doesn't represent America, but yet feeds into the Islamist narrative overseas, across the world, that America is against Islam, America is against Muslims. So, he used it to have his 15 minutes of fame, and it fed interest that narrative."