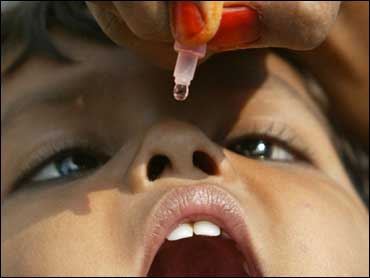 Farzaan Siddaqui beat up the last health workers who visited his home to vaccinate his children for polio. Like many Muslims in India, he thought the program was an infidel plot to make his community infertile.

Local health workers tried again Sunday, this time led through Siddaqui's Muslim neighborhood by a local cleric, one of scores of community leaders volunteering for an anti-polio campaign in India's most populous state, Uttar Pradesh.

The campaign aimed to vaccinate some 50 million children across the impoverished state, which has seen 438 polio cases this year, 25 of them over the past week. A smaller number of cases have also emerged in some other states, raising fears of a widespread resurgence of a disease once nearly wiped out in the country.

Sunday's campaign focused on Uttar Pradesh's Muslim neighborhoods, where many residents have routinely stayed away from polio immunization programs.

As the health care workers approached Siddaqui's house in Lucknow, one of them whispered, "This is a negative locality for us. Polio vaccine is a big no for them."

Siddaqui assaulted health workers in August as they tried to persuade him to immunize his 3-year-old son and a year-old daughter.

But this time, Wajhat Valdi — a cleric who would normally spend the day preaching at a local mosque — walked in while the health workers stayed outdoors.

It did not take him long to win over Siddaqui, who came out smiling some 15 minutes later. A vial of polio vaccine was handed to Valdi for Siddaqui's children.

Within moments, others in the neighborhood joined in.

"I am so happy that they have listened to me," Valdi said. "It was the will of Allah that I should come here."

Polio infects children younger than 5, spreading through contaminated water and attacking the nervous system. The disease can cause paralysis and deformation or be fatal.

Three years ago, India almost wiped out the disease after an intense nationwide vaccination campaign, but a combination of factors — including illiteracy and superstitious beliefs — kept many children from receiving immunizations.

Nearly three-quarters of new polio cases in Uttar Pradesh were in Muslim families, said A. K. Mishra, the top bureaucrat in the state's health department.

Nearly 25 million people live in Uttar Pradesh, a majority of them poor and illiterate.

In the past, banners and posters were put up in villages warning Muslims against allowing health workers into their homes. Propaganda spread that polio vaccines were a form of sterilization and a Western ploy to reduce the Muslim birth rate.

"Polio drops are safe and do not affect the health of your children," said Khalid Rashid, also a cleric, in a television appeal made in Urdu.