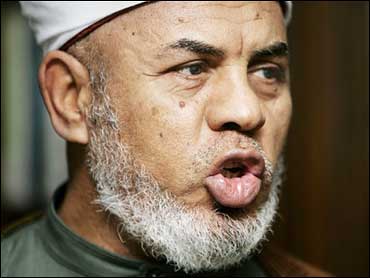 A senior Muslim cleric compared women who go without a head scarf to "uncovered meat" left out for scavengers, drawing widespread condemnation and calls Thursday for his resignation.

Sheik Taj Aldin al Hilali denied he was condoning rape when he made the comments in a sermon last month, and apologized to any women he had offended, saying they were free to dress as they wished.

Hilali was quoted in The Australian newspaper Thursday as saying in the sermon: "If you take out uncovered meat and place it outside ... without cover, and the cats come to eat it ... whose fault is it, the cats' or the uncovered meat's?"

"The uncovered meat is the problem. If she was in her room, in her home, in her hijab, no problem would have occurred," he was quoted as saying, referring to the headdress worn by some Muslim women.

"The idea that women are to blame for rapes is preposterous," Howard said.

The comments come during a heated debate in Britain about religious freedom centered around whether Muslim women should wear veils. Similar passions raged when France banned head scarves and other religious symbols in public schools two years ago.

In Australia, there was widespread condemnation Thursday of the cleric's comments from other Muslim leaders, civil libertarians and political leaders.

Australia's Sex Discrimination Commissioner Pru Goward said Hilali's comment was an incitement to rape and that Australia's Muslims should force him to resign.

"This is inciting young men to a violent crime because it is the woman's fault," Goward told television's Nine Network. "It is time the Islamic community did more than say they were horrified. I think it is time he left."

Hilali is the top cleric at Sydney's largest mosque, and is considered the most senior Islamic leader by many Muslims in Australia and New Zealand.

He has in the past served as an adviser to the Australian government on Muslim issues, but triggered a controversy in 2004 for saying in a sermon in Lebanon that the Sept. 11 attacks were "God's work against the oppressors." Hilali said later he did not mean that he supported the attacks, or terrorism.

Howard offended some Muslims recently by singling out some Muslims as extremists who should adopt Australia's Western liberal attitudes to women's rights.

Many Muslims say they are increasingly treated with suspicion since the Sept. 11 and other international terrorist attacks. Waleed Aly, a member of the Islamic Council of Victoria state, said Hilali's comments would result in more antagonism toward Muslims.

Hilali said in a statement he was shocked by Thursday's reaction to his sermon.

"The presentation related to religious teachings on modesty and not to go to extremes in enticements, this does not condone rape, I condemn rape," he said.

"Women in our Australian society have the freedom and right to dress as they choose, the duty of man is to avert his glance or walk away," he said.