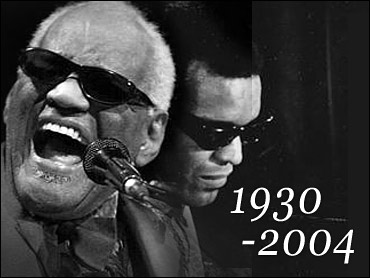 Ray Charles, a transcendent talent who erased musical boundaries between the sacred and the secular with hits such as "What'd I Say," "Georgia on My Mind" and "I Can't Stop Loving You," died Thursday. He was 73.

Blind by age 7 and an orphan at 15, the gifted pianist and saxophonist spent his life shattering any notion of musical categories and defying easy definition. One of the first artists to record the "blasphemous idea of taking gospel songs and putting the devil's words to them," as legendary producer Jerry Wexler once said, Charles' music spanned soul, rock 'n' roll, R&B, country, jazz, big band and blues.

He put his stamp on it all with a deep, warm voice roughened by heartbreak from a hardscrabble childhood in the segregated South. Smiling and swaying behind the piano, grunts and moans peppering his songs, Charles' appeal spanned generations.

His health deteriorated rapidly over the past year, after he had hip replacement surgery and was diagnosed with a failing liver. The Grammy winner's last public appearance was alongside Clint Eastwood on April 30, when the city of Los Angeles designated the singer's studios, built 40 years ago, as a historic landmark.

"Ray Charles was a man we particularly admired both as a friend and as an artist. We had a great time recently reminiscing together and we will all miss him very much," Eastwood said Thursday. He filmed Charles extensively for a segment in the 2003 documentary "The Blues."

Bruce Hornsby, another singer and piano player, recalled hearing Charles perform at a tribute to Elton John about a year ago. Charles was feeble, and was walked to the electric piano, but backstage he held artists like Brian Wilson, Diana Krall, Norah Jones and John Mayer in thrall.

"When he started singing, that was it," Hornsby said. "Everyone else was playing for second."

Charles won nine of his 12 Grammy Awards between 1960 and 1966, including the best R&B recording three consecutive years ("Hit the Road Jack," "I Can't Stop Loving You" and "Busted").

His versions of other songs are also well known, including "Makin' Whoopee" and a stirring "America the Beautiful." Hoagy Carmichael and Stuart Gorrell wrote "Georgia on My Mind" in 1931, but it didn't become Georgia's official state song until 1979, long after Charles turned it into an American standard.

"Ever since I was three years old, music has always fascinated me," Charles told CBS News Correspondent Bill Whitaker in an interview last September. "Music is number one in my life. That's it."

Charles considered Martin Luther King Jr. a friend and once refused to play to segregated audiences in South Africa. But politics didn't take.

He was happiest playing music, teaming with such disparate musicians as Willie Nelson, Chaka Khan and Eric Clapton. Pepsi tapped him for TV spots around a powerfully simple "uh huh" theme, and he appeared in movies including "The Blues Brothers."

Charles was no angel. His womanizing was legendary, and he struggled with a heroin addiction for nearly 20 years before quitting cold turkey in 1965 after an arrest at the Boston airport. Yet there was a sense of humor about even that — he released both "I Don't Need No Doctor" and "Let's Go Get Stoned" in 1966.

"I was lucky enough to tell myself, 'One day, you got to stop. This is fine. I been there and done that, but it ain't good for you. You need to let it go,'" Charles told Whitaker. "And I did exactly that."

Ray Charles Robinson was born Sept. 23, 1930, in Albany, Ga. His father, Bailey Robinson, was a mechanic and a handyman, and his mother, Aretha, stacked boards in a sawmill. His family moved to Greenville, Fla., when Charles was an infant.

"Talk about poor," Charles once said. "We were on the bottom of the ladder."
Charles saw his brother drown in the tub his mother used to do laundry when he was about 5 as the family struggled through poverty at the height of the Depression. His sight was gone two years later. Glaucoma is often mentioned as a cause, though Charles said nothing was ever diagnosed.

Charles began dabbling in music at 3, encouraged by a cafe owner who played the piano. The knowledge was basic, but it made him more prepared for music classes when he was sent away, heartbroken, to the state-supported St. Augustine School for the Deaf and the Blind.

Charles learned to read and write music in Braille, score for big bands and play instruments — lots of them, including trumpet, clarinet, organ, alto sax and the piano.

"Learning to read music in Braille and play by ear helped me develop a damn good memory," Charles said. "I can sit at my desk and write a whole arrangement in my head and never touch the piano. .. There's no reason for it to come out any different than the way it sounds in my head."

His early influences were myriad: Chopin and Sibelius, country and western stars he heard on the Grand Ole Opry, the powerhouse big bands of Duke Ellington and Count Basie, jazz greats Art Tatum and Artie Shaw.

By the time he was 15 his parents were dead and Charles had graduated from St. Augustine. He wound up playing gigs in black dance halls — the so-called chitlin' circuit — and exposed himself to a variety of music, including hillbilly (he learned to yodel) before moving to Seattle.

He dropped his last name in deference to boxer Sugar Ray Robinson, patterned himself for a time after Nat "King" Cole and formed a group that backed rhythm 'n' blues singer Ruth Brown. It was in Seattle's red light district were he met a young Quincy Jones, showing the future producer and composer how to write music. It was the beginning of a lifelong friendship.

Charles developed quickly in those early days. Atlantic Records purchased his contract from Swingtime Records in 1952, and two years later he recorded "I Got a Woman," a raw mixture of gospel and rhythm 'n' blues, pioneering what was later called soul. Soon, he was being called "The Genius" and was playing at Carnegie Hall and the Newport Jazz Festival.

His first big hit was 1959's "What'd I Say," a song built off a simple piano riff with suggestive moaning from the Raeletts. Some U.S. radio stations banned the song, but Charles was on his way to stardom.

Producer Wexler, who recorded "What'd I Say," said he has worked with only three geniuses in the music business: Bob Dylan, Aretha Franklin and Charles.

"In each case they brought something new to the table," Wexler told the San Jose Mercury News in 1994. Charles "had this blasphemous idea of taking gospel songs and putting the devil's words to them."

Charles was one of the legends receiving Kennedy Center Honors in 1986, cited as "one of the most respected singers of his generation ... the pioneer who broke down barriers between secular and sacred styles, between black and white pop."

His last Grammy came in 1993 for "A Song for You," but he never dropped out of the music scene. He continued to tour and long treasured time for chess. He once told the Los Angeles Times: "I'm not Spassky, but I'll make it interesting for you."

"Music's been around a long time, and there's going to be music long after Ray Charles is dead," he told The Washington Post in 1983. "I just want to make my mark, leave something musically good behind. If it's a big record, that's the frosting on the cake, but music's the main meal."