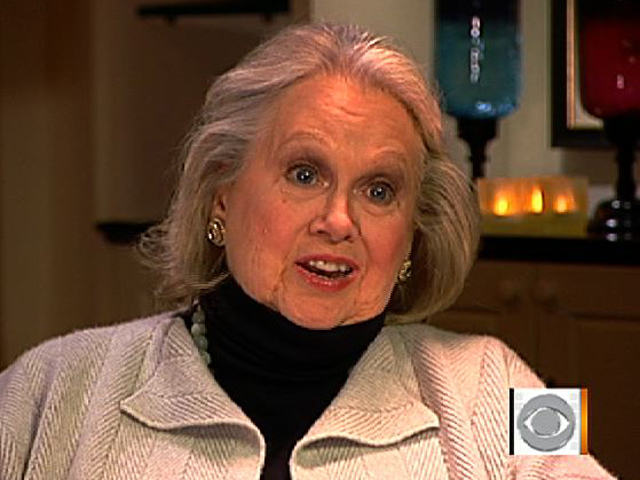 For more than half a century, Barbara Cook has taken the American songbook and made it her own. Now a Kennedy Center honoree for her work on Broadway and artistic contributions, the 84-year-old isn't stopping. She's still singing -- doing what she's done for as long as she can remember.

"I've always sung," Cook told CBS' Julie Chen recently. "I don't even remember not singing. I was born, I breathed, I sang, I think."

Known as one of the greatest vocal interpreters of all time, Cook is constantly improving her craft, getting better with age and experience.

"I think, you know, five years from now, I'll sing better than I do now," Cook said. "I truly do. Because I'll have more courage."

Raised in Atlanta, she started singing at a young age. Music was an escape from hard times.

"My mother and father divorced when I was maybe 6-and-a-half, close to 7 maybe," Cook recalled. "My mother and I then went to live wirh my grandmother in a really, really difficult situation. It was at the depth, or height, or whatever you wanna call it, of the Depression. So, it was very, very hard for, not just us -- for everybody."

At age 21, Cook moved to New York, following her dream of a singing and acting career -- and never looked back. Quickly, that career took off, with Cook finding steady work on the stage. Winning a Tony award for playing Marian the librarian in 1957's "The Music Man" made her a certified Broadway star.

"I didn't feel as if I was the toast of the town," Cook said. "I was very happy to have gotten that award, don't get me wrong."

Was she surprised? Or did she kind of know?

Cook said, "Well, I'll tell you the truth. I had done 'Candide' the year before. And I thought -- I wasn't even nominated that year. I thought I should get it for 'Candide.' Well, I didn't think it was in the bag. But I thought, 'Gee whiz, maybe,' because it was such an incredible departure for me, and still the most difficult thing I've ever done vocally, by far. By far. And I was kind of disappointed when I didn't even get nominated. So then, I wasn't expecting it for 'Music Man,' no."

There was more success, but doubt, depression and alcoholism took their toll.

When asked what happened, Cook said, "I was a drunk. Pure and simple. .. You know, you slip into it. So, you don't know when it happens. You don't know when you cross into that -- you think you have trouble, so you drink. And you think, 'If I could fix the troubles, I wouldn't drink.'"

Cook said she was an alcoholic for about 10 years.

She said, "Just about the only thing I feel bad about in my career is that, during the years when I (was in my) forties and fifties, when I was in my prime, when I should've been doing my best work in theater, I was not employable. I was not employable for selling Kleenex at the drug store. I just -- you know -- I could not function. ... I wasn't working. I couldn't. I couldn't work. No. I was just being a drunk."

Cook finally got sober. She credits her 30-year collaboration with accompanist and musical director Wally Harper for saving her life and career.

"it was a great, great coming together," Cook said. "Two sensibilities coming together. And -- he died in 2004. And it was horrible. Very, very hard. You know, it wasn't just that he played the piano for me. We -- we thought alike musically, do you know? And he was very, very special for a lot of people."

Cook returned recording and the stage, taking her highly acclaimed one-woman show to theaters and cabarets around the world. She also teaches master classes to aspiring performers, hoping they can learn from her life experience.

"What I want is for people to let me in," Cook said. "I want people to put their life experience and how they feel this minute into what's happening right now."

And right now, Cook said she is feeling gratitude.

"I know that I can move people, people who are willing to be moved," Cook said. "And it's a wonderful feeling to know that -- that you can make that connection. It's a great feeling."

And at age 84, Cook is now a Kennedy Center honoree.

You can see the Kennedy Center Honors this Tuesday night at 9/8c on CBS.