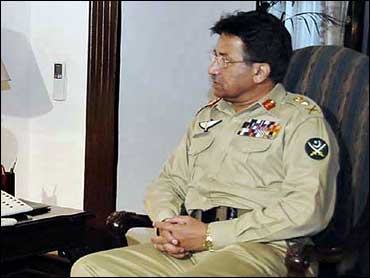 President Gen. Pervez Musharraf will seek a new five-year term in a presidential election set for Oct. 6, officials said Thursday, even as opponents urged the courts to stop him from running and vowed to quit Parliament in protest.

After the U.S.-allied leader signaled his plan to resign as army chief if re-elected, the Election Commission announced that the ballot by federal and provincial lawmakers would be held Oct. 6.

Musharraf, who seized power in a 1999 coup, aims to stay on as president despite a sharp drop in his popularity. The ruling coalition says it has enough votes to re-elect him.

Opposition parties are threatening to boycott the vote to deny it legitimacy. There is no sign they will field a candidate of their own.

The main threat to Musharraf's plan appears to be its disputed legality. The Supreme Court on Thursday continued hearing a raft of complaints - including over recent changes to the election rules that favor Musharraf.

A ruling on the general's eligibility could come within days.

Opponents, including exiled former Premier Nawaz Sharif, whose government fell to Musharraf's coup eight years ago, and a six-member alliance of Islamist parties said their lawmakers would quit if the Election Commission accepts Musharraf's nomination papers.

They vowed to mount street protests as well as more legal challenges to stop Musharraf.

"The letter and the spirit of the constitution do not permit President Musharraf to be a candidate," said Sadiq ul-Farooq, a leader of Sharif's Pakistan Muslim League-N party.

Deputy Information Minister Tariq Azim dismissed their concerns. "The opposition should come up with its own candidate to participate in the contest, if they have any," he said.

The party of another ex-prime minister, Benazir Bhutto, whose talks with Musharraf over a possible power-sharing deal have stalled, has threatened to join the opposition boycott unless the president relinquishes his army post first.

The chief of the Commonwealth on Thursday urged Musharraf to stick to his promise to doff his uniform. He said the other key test of Pakistan's return to democracy would be the fairness of parliamentary elections due by January.

Don McKinnon, secretary-general of the 53-member grouping of former British colonies, told The Associated Press that Pakistan was at a critical stage in its volatile history of on-off military rule.

The Commonwealth suspended Pakistan from its decision-making councils after Musharraf's coup in 1999. Full membership was restored in 2004, but the group has continued urging the president to restore civilian rule.

Musharraf's pledge to continue as a civilian president "is very much the essence of what the Commonwealth was concerned about," McKinnon said in an interview in Islamabad. "He's made the commitment and one would wish to see it (followed) right through."

"If people are satisfied that the (parliamentary) elections are free and fair, that will be a very good sign that Pakistan's on a good path," McKinnon said.

As well as calls for restoring democracy, Musharraf, who became a key ally of the U.S. after the Sept. 11, 2001, attacks, is struggling to contain an upsurge in violence by Taliban and al Qaeda militants.

In the latest attack, a bomb exploded outside a hotel in the northern city of Swat on Thursday, killing one police officer and wounding four hotel guards, police said.