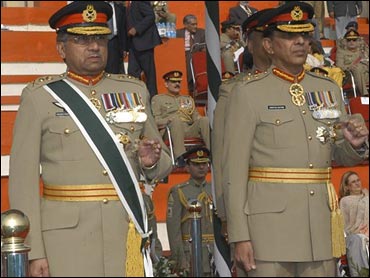 This story was written and reported by CBS News' Farhan Bokhari.

Pakistan's beleaguered president, Gen. Pervez Musharraf, has stepped aside as chief of the army, while retaining the post of president.

Surrounding the pomp of the handover ceremonies early Wednesday was inevitable speculation over the political future of Musharraf - a U.S. ally since 2001 - in a country which has been ruled by the armed forces for more than half of Pakistan's life as an independent state.

"I am sad to leave this army. The army has been my life and my passion," said the 64-year-old general, in his farewell speech at a hockey stadium outside military headquarters in Rawalpindi, the military's main garrison town outside Islamabad, the Pakistani capital.

The handover of military power to Gen. Ashfaq Kayani ends Musharraf's nine years as chief of the army staff, of which he spent almost eight years as Pakistan's top leader since seizing power in a bloodless coup in 1999.

As Musharraf prepares to oversee controversial parliamentary elections in January 2008, analysts and western diplomats warned that his ability to influence future events will be compromised without a direct command of the military.

Musharraf's exit as chief of the military answers one demand from the Bush administration, which has also urged Musharraf to lift a nationwide state of emergency, release all recently arrested political activists, and ease curbs on Pakistani news organizations.

"With Musharraf now out of his uniform, his opponents will feel emboldened. Any army chief, of course, is much more powerful than a retired army chief," said Hasan Askari Rizvi, a widely respected Pakistani commentator on political affairs, in an interview with CBS News. "The political opposition which has repeatedly called for General Musharraf to step out of his military uniform will probably find reason to further unite against him. We are not looking at Musharraf being forced out of office as president any time soon. But the movement against him will gather momentum."

A senior western diplomat who spoke to CBS News on the condition of anonymity said the new army chief, Gen. Kayani, will continue with Pakistan's support of the U.S.-led war on terror, but may not necessarily share General Musharraf's political views.

The Pakistan army has faced an unprecedented number of suicide attacks this year, largely seen linked back to Islamic militants connected to al Qaeda and the Taliban. The most recent two attacks, earlier this month, targeted a security checkpoint outside the Pakistan army's headquarters in Rawalpindi and a bus carrying junior employees of Inter Services Intelligence, an elite intelligence service.

In addition to such security challenges, the Pakistani army's reputation suffered as controversy continued to gather around Musharraf during the time that he remained in charge of the country while also serving as the army chief.

"This is a difficult time for the Pakistan army. The army seems to have become unpopular, given General Musharraf's exposure to political controversies," said the western diplomat. "Now you could ask yourself if under a new chief, the army will be keen to resurrect its public image as a fighting force, rather than a political force."

Thursday, Musharraf is to take the oath of office as a civilian president for a term which lasts till 2012. But analysts warned that in addition to the prospect of growing pressure from the opposition, Musharraf will continue to be a much sought after target by al Qaeda and its affiliates.

He has lived under more security than that given to any Pakistani leader, dating back to December 2003, when he survived two separate attacks - one from a bomb planted near the road where he was driving and the other by a suicide attacker.

Both attacks were linked to al Qaeda, according to Pakistani intelligence officials who spoke to CBS News shortly after those attacks.
By Farhan Bokhari