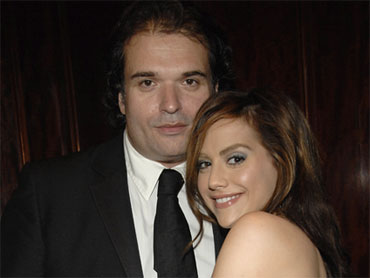 Brittany Murphy's husband is crying foul on speculation that his wife died from a drug overdose or that she had an eating disorder.

British screenwriter Simon Monjack told People magazine in an interview published Tuesday that rumors of drug use and anorexia are "crazy" and that he is "devastated" by the death of the 32-year-old actress.

"These rumors that she was anorexic? It's crazy - she was slim, but that was her natural physique," Monjack told the magazine. "This is what's killing all of us. How did it happen? Her mum, myself and her family - we want to know why we lost our baby."

Monjack also said that he hasn't slept since his mother-in-law found Murphy collapsed in the bathroom on Sunday, and explains why he initially opposed an autopsy on his wife.

"My initial reaction to the autopsy was - they're going to cut her open - I couldn't bear it," he said. "But we realized we needed to know. I look forward to getting the results."

When asked by the magazine if a drug overdose was a possible cause of death, Monjack replied, "I can get rid of that one right now."

An autopsy was conducted Monday by the Los Angeles County coroner office. It said there was no evidence of trauma to Murphy's body and that it would defer releasing a cause of death until after toxicology tests are complete.

However, a leaked copy of the autopsy findings surfaced on TMZ.com. TMZ's report stated the investigator, who is identified only by last name, noted numerous bottles of prescription medications were found in Murphy's name at the Hollywood Hills home.

Assistant Chief Coroner Ed Winter said Tuesday that he doesn't know how the Web site apparently obtained the confidential report and that he couldn't confirm details about the TMZ story because he hadn't yet seen the form that lists the medications taken from Murphy's home.

The 32-year-old star of films such as "Clueless" and "8 Mile" died after collapsing at her Hollywood Hills home. Paramedics found the actress in cardiac arrest and tried to revive her, but she was pronounced dead at Cedars-Sinai Medical Center.

Murphy's family said that the actress was ill with flu-like symptoms in the days before her death and prescription medications were taken from her home, according to the coroner's office.

In the interview with People magazine, Monjack said that Murphy, whom he married in 2007, suffered from a heart murmur which can cause fatigue, dizziness and irregular heartbeats, but added that it is generally not life-threatening and that she didn't require medication to treat it.

He also said that Murphy was ill the day before she died, resting in bed and suffering from laryngitis, which he said the actress treated with herbal tea, ginger and lemon.

"She was on herbal remedies that wouldn't speed up her heart," Monjack told the magazine. "There was nothing here that could endanger her; there was prescription medication in the house for her female time and some cough syrup. That was it."

On Tuesday, Dr. Cyril Wecht, a leading pathologist, told "Early Show" co-anchor Maggie Rodriguez that while "it's possible" Murphy may have died of natural causes, he believes drugs were involved.