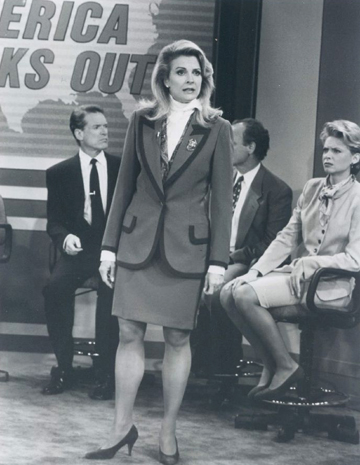 Murphy Brown is coming back, and this time, the legendary anchorwoman be hosting a show called "Murphy in the Morning." CBS announced its 2018-2019 lineup on Wednesday and said that its "Murphy Brown" reboot will air at 9:30 p.m. Thursday. Star Candice Bergen will reprise her role as the titular character.

On the show, Bergen's character, who originally hosted a primetime newsmagazine show, will host a morning show, and she'll be up against a very familiar contender: Her son. Jake McDorman will play Murphy's son, who has a conservative morning news show, reports EW.

The reboot of "Murphy Brown" will focus on "a world of cable news, social media, fake news and a very different political and cultural climate," according to a press release. The original series aired for 10 years on CBS, from 1988 to 1998, and received 62 Emmy nominations with 18 wins and 15 Golden Globe nominations with three wins. Bergen also serves as an executive producer.

Watch a preview of "Murphy Brown" by clicking here or watching in the video player below: