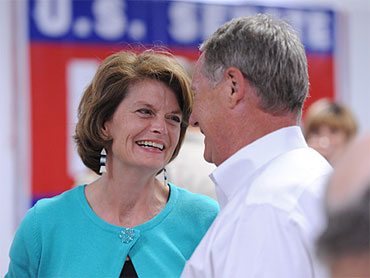 Republican Sen. Lisa Murkowski trailed her lesser-known conservative opponent Tuesday in a surprisingly tight race that was seen as a test of the political power of Sarah Palin and the tea party movement.

With 98 percent of precincts counted, Murkowski trailed political newcomer Joe Miller by 1,960 votes out of more than 91,000 counted. As many as 16,000 absentee votes, as well as an undetermined number of provisional or questioned ballots, remain to be counted, starting Aug. 31.

Miller had 45,909 votes, 51 percent, while Murkowski had 43,949 votes, 49 percent. Miller had maintained a lead throughout the night, but his lead fluctuated as ballots were counted.

It could be a week or more before the final results of the race are known. The state Division of Elections said it had received about 7,600 absentee-type ballots by Monday. Officials plan to begin counting outstanding absentee ballots Aug. 31, and absentee ballots postmarked by election day can be received for up to 10 days after the election. State law allows for 15 days to count absentee and questioned ballots.

Miller is a decorated Gulf War veteran backed by Palin and the Tea Party Express who sought to cast Murkowski as being too liberal and part of the problem in an out-of-control Washington. It is a campaign strategy that has helped oust other incumbents this year.

Murkowski has proudly touted her seniority after eight years in office, and said her roles on the appropriations and energy committees put her in a strong position to ensure Alaskans' voices are heard. She denounced Miller for making what she considered deceptive statements about her votes and statements. He stood behind everything he'd said.

Miller told reporters he's trying to be realistic about the early results showing him slightly in the lead. He spoke to reporters at election central headquarters in Anchorage, where his supporters chanted "Miller Time!" and "Go Joe Go!" Miller joked on Twitter, "What's the moose hunting like in the Beltway?"

Murkowski spokesman Steve Wackowski said the campaign remained upbeat about its chances, especially with votes in rural Alaska still coming in. More than 16,000 absentee ballots were mailed, and they won't be counted until Aug. 31.

"I can say we're still here waiting. That's what we're doing," Murkowski said shortly after midnight at her campaign headquarters.

Asked if she conceding, she replied, "Absolutely not."

After keeping a low profile for much of the race, Palin recorded a robocall for Miller in the final days of the campaign and touted him as a "man of the people" on her Facebook page. The former Alaska governor also repeated a claim that Murkowski had waffled on her position on repealing the federal health care overhaul - claims the senator has called false.

Palin has been on a losing streak as of late with her candidates faltering, and many were expecting similar results in Alaska with Murkowski holding such a name-recognition and fundraising advantage.

Palin and the Murkowski family have a complicated history.

Palin trounced Murkowski's father, Frank, in the 2006 gubernatorial primary - the race that would launch her national political career. Last year, she said she'd raise money for Lisa Murkowski, and even contributed to her campaign, quieting widespread speculation that Palin would challenge Murkowski for the seat. But the women have clashed on issues like health care, though they've denied any bad blood between them.

Murkowski has fought back against Miller and Palin's claims. A radio ad on the election's eve calls Miller out as twisting the truth about Murkowski's position on the federal health care overhaul. Miller has stood by his statements.

"Alaskans deserve to know the honest truth," she said, "and they haven't gotten it from Miller."

The race was disrupted when former Sen. Ted Stevens died in a plane crash, with both candidates briefly suspending campaign ads.

Miller had the blessing of the tea party crowd. The national Tea Party Express reported spending at least $550,000 to help Miller.

Murkowski was appointed to the Senate at the end of 2002 by her father and won her first term in 2004.

The winner of the primary will face Democrat Scott McAdams.

In other notable races:

• John McCain sailed to nomination for a fifth Senate term Tuesday over an Arizona challenger with tea party support, while big-spending political novice Rick Scott beat an insider in Florida's Republican gubernatorial primary as voters split on the merits of establishment candidates vs. outsiders.

• The Vermont Democratic gubernatorial primary was also too close to call as of Wednesday morning. With 232 of 260 precincts reporting, 921 votes separated the top three candidates. State Sen. Peter Shumlin was leading Sen. Douglas Racine by 121 votes with Secretary of State Deb Markowitz a close third. If the vote count holds, either Racine or Markowitz could ask for a re-count. The winner will run in November against Republican Lt. Gov. Brian Dubie, who did not face a primary opponent.

• The son of former Vice President Dan Quayle won the Republican primary for an Arizona congressional seat after a provocative campaign that had no shortage of drama.

Ben Quayle emerged from a crowded field Tuesday in the fight for an open seat in a Republican-leaning district in the Phoenix area. He drew on his family connections to raise more than $1.3 million - and made plenty of headlines along the way.

In a campaign ad, he called President Barack Obama "the worst president in history" and vowed to "knock the hell" out of Washington.