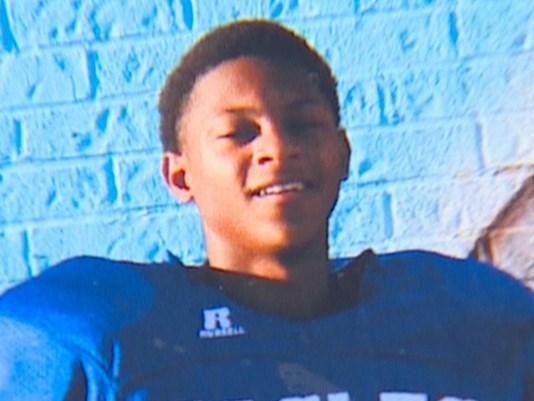 Fifteen-year-old Roy Stuart never left home without a football in his hand. Last year, the Dallas teen was named Kennedy Curry Middle School’s eighth grade defensive player of the year. And one day, he hoped to play professionally.

Last week, however, those dreams were cut short when Stuart was shot in the head by an unknown assailant in the South Oak Cliff apartment complex where he lived with his grandmother, Brenda. The high school freshman became the latest in a tragic list of 146 murders in Dallas so far this year, a statistic which is up about 25 percent over last year. The case remains unsolved.

Brenda adopted her grandson when he was just an infant, as his parents were in and out of prison for most of his childhood.

“This is him when I brought him home,” she told WFAA in Dallas, kissing a photo of Roy as a baby. “When I tell you perfect, he was a perfect baby. That was my heart.”

Brenda Stuart learned that her beloved grandson had been shot when she at the grocery store.

“Somebody asked me, ‘How is your baby doing?’” she recalled. “‘I guess he’s doing all right. What’s supposed to be wrong with him?’ [Then] she said, ‘I heard he got shot.’”

She dropped her groceries and ran to Roy’s side at the local hospital, where he had been placed on life support.  The teen remained that way for three days, until his family made the difficult decision to take him off.

That’s when young Roy became a hero for four other families who were desperately awaiting life-saving organ transplants. In death, the 15-year-old boy gave life to others with his liver, lungs, kidney and heart.

“He has a good heart, and it will live on in somebody else,” a heartbroken Brenda told WFAA. “He was always trying to help somebody when he was alive, and now that he’s gone, he’s still helping people.”

So now, Roy — or Brenda’s “heart,” as she calls him — lives on in those four people he saved; his heart physically beating in one of their chests.