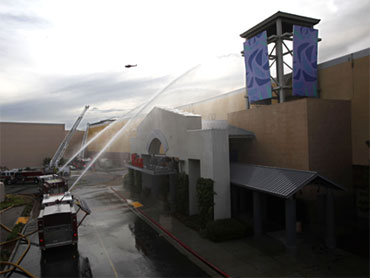 A man wanted in Florida in the death of his ex-girlfriend climbed an 18-story crane at a construction site and remained there Thursday morning as authorities tried to talk him down.

The man got onto the crane around 5 p.m. Wednesday and was about 160 feet above the ground, indicating he was contemplating suicide, Atlanta police spokesman Sgt. John Quigley said Thursday.

Florida officials identified the man as Carl Edward Roland, 41, who was wanted by the Pinellas County, Fla., sheriff's department in the slaying of his former girlfriend. The badly beaten body of Jennifer L. Gonzalez, 36, was found in a pond Tuesday.

However, Atlanta police were not releasing the man's identity - or any other information about him - Thursday morning.

"I don't want to give this guy any notoriety. I don't want any copycats," Quigley said. "I just hope he comes down safely."

The intersection where the construction site was located was closed, snarling traffic in Atlanta's Buckhead neighborhood. Police negotiators tried to talk to the man throughout the night.

Quigley wasn't sure how the man got onto the crane, saying it was possible the construction crew had left for the day.