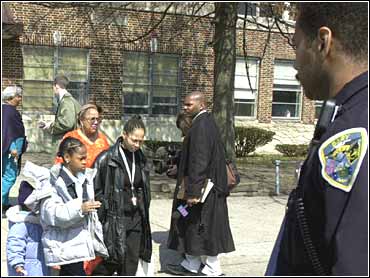 The 17-year-old suspect in the fatal shooting of a high school student in Gary, Indiana has been charged with murder.

Police said the victim was an average-to above-average student with no disciplinary problems. They said he was targeted by Burt, who pulled out a gun and shot him in the head as other students stood by in a parking lot waiting for the start of classes.

Police Cpl. Danny Sorbello arrested Burt at his home near the high school. Sorbello said a relative answered the door, and Burt came out of a room and surrendered.

Burt did not have the gun when he was arrested, but Police Chief John Roby said the suspect admitted shooting Boyd and told authorities where he hid the gun. His alleged motive was still unclear, according to a city spokeswoman.

"It was a one-on-one incident," Roby said. "Basically what happened, the 17-year-old walked up to the 16-year-old and put a gun to his head and fired one shot."

The victim was found in the parking lot, next to a trash can near the walkway that leads to the main entrance to the school.

Police officer Jeff Tatum, who is stationed at the school full-time, ran to the scene after the shooting. He said Boyd was trying to get up after he was shot.

Another officer stationed at the school, Henry Davis, said the two boys were from the same neighborhood.

"I guess the fortunate thing about it is that there was only a small crowd around," Roby said. "Most of the kids were in school."