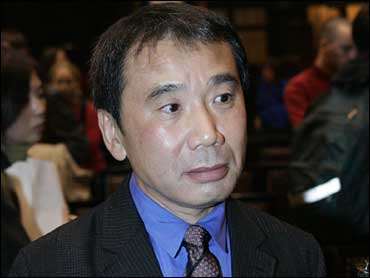 Haruki Murakami's "Blind Willow, Sleeping Woman," a sometimes surreal collection of short stories, and Greg Mortenson's and David Oliver Relin's "Three Cups of Tea: One Man's Mission to Promote Peace ... One School at a Time," are this year's winners of the 11th annual Kiriyama Prize.

The $30,000 award, to be divided between the three winners, was announced Tuesday by Pacific Rim Voices, a nonprofit organization "dedicated to celebrating literature that contributes to greater understanding of and among the peoples and nations of the Pacific Rim and South Asia."

Editor's note:
An April 17, 2011 "60 Minutes" report quotes multiple sources saying that some of the most inspiring and dramatic stories in Greg Mortenson's best-selling books are not true, and that Mortenson's charity, the Central Asia Institute, has spent more money in the U.S. talking about education in Pakistan and Afghanistan than actually building and supporting schools there, according to an analysis of the organization's last financial report.

Murakami, the fiction winner, is known for such novels as "The Wind-Up Bird Chronicle" and "Kafka On the Shore." Among the finalists were Kiran Desai's "The Inheritance of Loss," winner of the Man Booker Prize and the National Book Critics Circle fiction award.

"Three Cups of Tea," the nonfiction winner of the Kiriyama, tells of Mortenson's founding of the Central Asia Institute, which has built dozens of schools around Pakistan and Afghanistan.

Previous winners of the Kiriyama Prize include Michael Ondaatje and Rohinton Mistry.