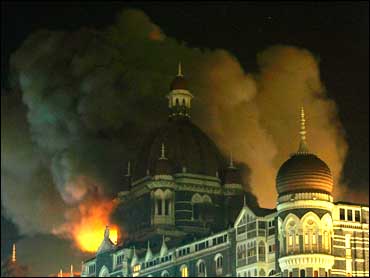 Black-clad commandos rappelled down a building and Mumbai's police showed off their new gear Thursday in what was intended as a reassuring display of force a year after a terror attack across the city killed 166 people.

Activists fear the security upgrades are not enough to prevent a repeat of the attack that laid siege to luxury hotels, turned a train station into a scene of carnage and paralyzed India's commercial heart for 60 hours.

Ten Pakistan-based gunmen arrived by boat Nov. 26, 2008 and hit targets across the city as India's police and military struggled for nearly three days to regain control. Seven men were charged in Pakistan on Wednesday with links to the assault.

On Thursday, about 100 beds were set up at the Chhatrapati Shivaji train terminal, where 58 died and 104 were injured, for a blood donation drive organized by railway authorities and private groups.

Police, who were criticized for being poorly trained and underarmed, used the anniversary to exhibit their upgraded equipment - part of Mumbai's 1.3 billion rupee ($27.7 million) plan to beef up security.

Commandos rappelled down the side of a building in downtown Mumbai and the city's new Force One commando unit, an elite anti-terror brigade of more than 200 men, was inaugurated Tuesday.

A fleet of new camouflaged armored vehicles and rapid intervention vehicles manned by commandos with guns drawn made its way down Marine Drive as a marching band played. Seven companies of commandos and police officers marched out onto the adjacent sandy beach.

But only a few morning walkers and meditators - and 20 television vans - showed up for the parade.

"It's pathetic. There are no Indians here. These poor guys who are here to defend them and this is the respect they have?" said a man who would only give his name as Sam, 71.

Local politicians plastered south Mumbai with posters of their own image in commemoration of the attack, and a shrine to Tukaram Ombale, a police officer who helped capture the lone surviving gunman, Ajmal Kasab, was decorated with wreaths and garlands at the corner where he died.

But many local activists were dissatisfied with the security reforms.

"The police force is being run not in a professional manner, but in a political manner," former police commissioner Julio Ribeiro said.

A handful of people from a citizens' group gathered outside the Taj Mahal hotel Wednesday evening to urge further police reform. They lit candles and chanted a patriotic song before a flank of flashing cameras.

"The tragedy took place precisely because the police miserably failed in its duties," said Shukla Sen, a member of the Citizens' Initiative for Peace, formed last December. "The functioning of the police must improve."

Religious leaders and diplomats gathered Wednesday evening for a memorial service held at the Keneseth Eliyahoo synagogue. A dozen policemen guarded the street outside.

"We will not let the terrorists deter us," said Rabbi Avraham Berkowitz, who is in charge of rebuilding the Chabad House, a Jewish center run by the orthodox Chabad-Lubavitch movement, where six people were killed. "We will continue with the full faith in God that he will protect us."

Tal Abraham, 78, a Jewish Indian who has lived in Israel for 49 years, said he came to the city especially for the commemoration. "I'm too sad," he said.

Five young Indian men who studied under Gavriel Holtzberg, the rabbi at Chabad House who was killed along with his pregnant wife, also attended.