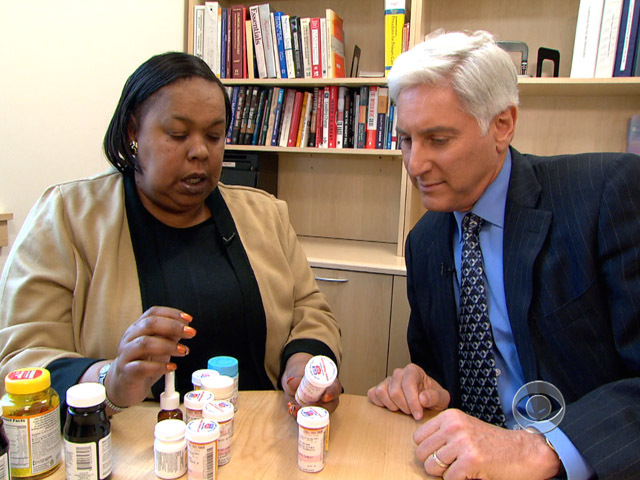 (CBSNews) Problems with taking multiple drugs are not limited to drug abusers. In the last 10 years, the percentage of people over 60 who take five or more medications has jumped from 22 percent to 37 percent. CBS News medical correspondent Dr. Jon LaPook looks into in the risks.

It's 12, plus four over-the-counter. Martin is one of more than 30 million Americans taking five or more prescription drugs, often called polypharmacy. With each added drug, the risk of side effects increases. For example, Prilosec, which lowers stomach acid, can weaken the effect of the blood thinner Plavix.

Some primary care doctors are trying a new approach -- bringing pharmacists like Sonia Freitas from behind the counter to the office.

"Do you ever look at a bottle and say, 'Wait a second. We didn't even prescribe this. I didn't even know you were taking this,'" LaPook asked Freitas.

The day we visited, she sat down with Martin and reviewed every single drug.

"You want to separate the dose. So if you take one in the morning, you should wait until later [at] dinner to take that second dose," she told Martin.

It turned out Martin may not be using her inhalers properly.

"So we're gonna give it a couple of days [to] try to do something a little different. And if not, we'll probably change out some things," said Martin.

"Sometimes it's the simplest thing in helping somebody organize their pill box that can be the most rewarding," she said.

Many patients do need a combination of drugs. The point isn't to demonize medications -- it's to use them with care.