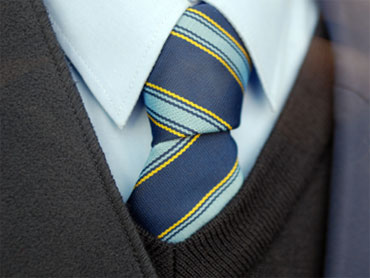 When I first read about the movement many public schools are making toward such policies -- according to the U.S. Department of Education, the percentage of public schools requiring uniforms has risen from 3 to 18 percent since 1996 -- I was torn. Having gone to a small, private school where there was a fairly strict dress code that included a formal uniform on Wednesdays, I think back on that experience with both positive and negative reactions that certainly impact my view on the topic with respect to my two daughters.

I can vividly recall being frustrated with having to wear specific styles and colors of clothes to conform to the dress code and can even remember going so far as to resort to non-standard socks, shoelaces or belts to weave some element of personality into my outfits. At the same time -- let's be realistic -- I was a school age boy more concerned with who was pitching for the Red Sox that evening than what I was going to be wearing to school that day. Not having to concern myself with clothing choices in the morning or the tortures of school shopping with Mom had their own distinct benefits!

With a young girl in the house, I've learned however, that my experiences as they relate to clothing aren't representative of the reality in which I now find myself.

For my daughter, choosing her own outfits each morning -- and having some say in what clothing gets purchased to fill the closet she picks from -- is one of both the highlights and most dramatic moments of the day. Eventually, she'll come in with some form of a long, flowing, brightly-colored Bohemian dress, and I've come to respect her personal sense of style. It has been especially interesting for me to watch how her independent choice of outfits has been followed with a more confident and independent sense of self with friends and peers. I find this personal development and correlation between independent choice and self-worth to be the most troubling aspect of the possibility of her being corralled into a uniform dress code.

On one hand, I can respect parents who say the uniforms help them save money, and teachers who believe they help promote unity, order and academic seriousness. I think both are extremely valid points and worth consideration by public school boards. Looking back on my own experience, I think that there is a sense of unity and structure that results from dress codes that is positive for the learning environment.

I can also appreciate the thought -- and the potential recouping of 15 lost minutes each morning pining over my daughter's closet -- that uniforms make mornings less stressful when a child is thinking about what outfit to represent his or own personal brand or identity that day.

But for me, the benefits of freedom of thought and expression and the tie to a creation and ownership of personal identity are too valuable to lose. While I fully support measures to take actions to "clean up" the clothing that many children wear to school these days -- whether too promiscuous or too profane -- I don't think a strict white polo and khaki skirt or pants uniform is right for my children's personal development.

Tim Daloisio is a interactive marketing consultant and full-time at-home dad to two girls, one four and one seven-months. They live in New Hampshire. Follow his adventures in parenting at DadIsMe.com.