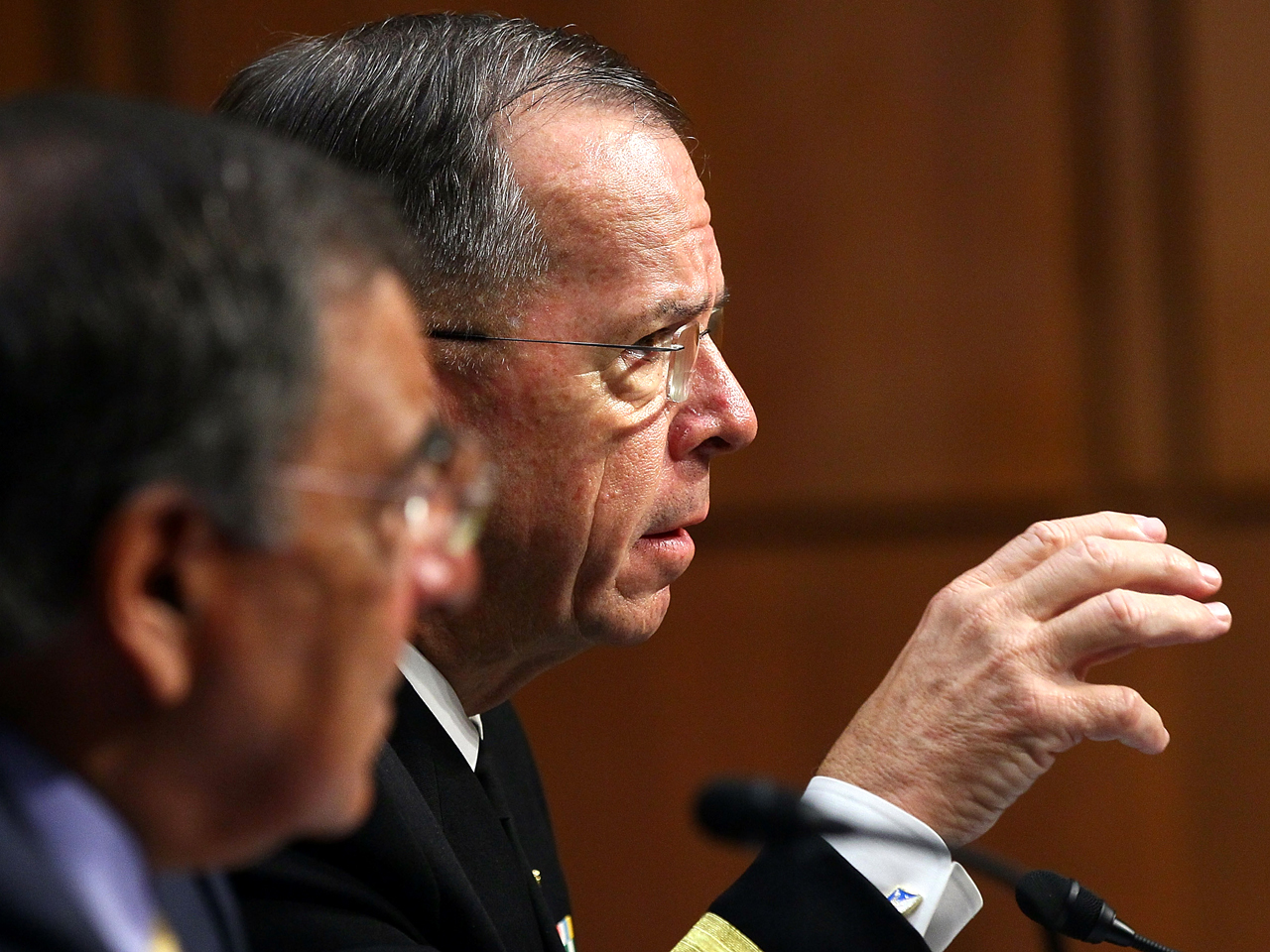 Navy Adm. Mike Mullen, chairman of the Joint Chiefs of Staff, said Pakistani duplicity puts in jeopardy not only the frayed U.S.-Pakistani partnership against terrorism but also the outcome to the decade-old war in Afghanistan.

Special Section: Afghanistan, Ten Years Later
U.S. to Pakistan: Get Haqqani, or we will
Kabul attack a bad sign for Afghan security

In his final congressional testimony before retiring next week, Mullen said success in Afghanistan is threatened by the Pakistani government's support for the Haqqani network of militants, which he called a "veritable arm" of Pakistan's intelligence agency.

A Pakistani government minister who spoke on condition of anonymity to CBS News' Farhan Bokhari in Islamabad said Mullen's accusation that the Pakistani agency, the ISI, has links to the Haqqani network "will not help to stop the ongoing slide in our relations. Any public bickering of this kind makes it much harder to overcome the damage."

A western diplomat who also spoke to Bokhari on condition of anonymity said the accusation "is quite a serious development. There is a dangerous standoff. I doubt the U.S. pressure will ease unless Pakistan takes immediate steps in dealing with U.S. concerns."

Repeating a charge he made earlier this week, Mullen said Thursday that with Pakistani support the Haqqanis were behind not only the Sept. 13 embassy assault but also a recent truck bomb that wounded 77 U.S. soldiers and a June 28 attack against the Inter-Continental Hotel in Kabul — as well as "a host of other smaller but effective operations."

Clinton: Kabul attackers will be "dealt with"
Taliban resilience on display in Kabul attacks
77 Americans wounded in Afghan truck bombing

Mullen said Pakistani intelligence is using the Haqqanis and other extremist groups as its proxies inside Afghanistan.

Mullen said Pakistan's government has chosen to "use violent extremism as an instrument of policy," adding that "by exporting violence, they have eroded their internal security and their position in the region. They have undermined their international credibility and threatened their economic well-being."

Mullen also deplored the "pernicious effect" of Afghanistan's own poor governance and corruption.

"If we continue to draw down forces apace while such public and systemic corruption is left unchecked," Mullen told the Senate Armed Services Committee, "I believe we risk leaving behind a government in which we cannot reasonably expect Afghans to have faith. At best this would lead to localized conflicts inside the country; at worst it could lead to government collapse and civil war."

Testifying alongside Mullen, Defense Secretary Leon Panetta also decried Pakistani support for the Haqqani network, and he said Pakistani authorities have been told that the U.S. will not tolerate a continuation of the group's cross-border attacks. Panetta said the message was delivered recently by new CIA Director David Petraeus in a meeting with the head of the ISI.

"They must take steps to prevent the safe haven that the Haqqanis are using," Panetta said. "We simply cannot allow these kinds of terrorists to be able to go into Afghanistan, attack our forces and then return to Pakistan for safe haven."

He repeated the point later, adding, "That is not tolerable."

Sen. Carl Levin, D-Mich, chairman of the committee, pressed Panetta on what options are available to the U.S. to go after the Haqqani network. Panetta declined to go into details publicly but made clear that the Pakistanis know what might happen.

"I don't think they would be surprised by the actions we might or might not take," he said. He also said he has not "spelled out" for the Pakistanis what unilateral actions the Obama administration would be willing to take.

The remarks by Mullen and Panetta highlight a notable shift in the administration's approach to Pakistan. Whereas U.S. officials previously kept their strongest criticisms of Pakistan private, in recent days they have been explicit in linking the government to extremists who are attacking U.S. forces in Afghanistan.

Mullen's strong words are especially notable in light of his role in trying to use personal persuasion to change Pakistani behavior. He told the committee that he has met with his Pakistani counterpart, Gen. Ashfaq Pervez Kayani, more than two dozen times over the past four years, and he defended the rationale for cultivating that link.

"Some may argue I have wasted my time, that Pakistan is no closer to us than before and may now have drifted even further away," he said. "I disagree." He said cooperation from the Pakistani military is improving.

Sen. Susan Collins, R-Maine, asked Panetta whether he supports a move in Congress to condition further U.S. aid to Pakistan on the administration being able to certify that the Pakistani government is cooperating with the U.S. in fighting extremist groups, including the Haqqanis.

"Anything that makes clear to them that we cannot tolerate their providing this kind of safe haven to the Haqqanis, and that they have to take action — any signal that we can send to them — I think would be important to do," Panetta said.

In recent days administration officials have taken a harsher tone toward Pakistan, accusing Islamabad of maintaining links with the Haqqani network, a band of Islamist fighters that the U.S. says are behind attacks in Afghanistan, including last week's attack on the U.S. Embassy in Kabul.

Mullen said earlier this week there is a "proxy connection" between Pakistani intelligence services and the Haqqanis, meaning the militants are secretly doing the Pakistanis' bidding.

"The Haqqani piece of this has got to be reversed — period," he told the Carnegie Endowment for International Peace.

Mullen said he delivered that message to Kayani last week during a meeting in Spain.

After the U.S. raided Osama bin Laden's secret compound inside Pakistan in May — without alerting Pakistani authorities in advance — relations deteriorated further. Pakistan suspended a program under which U.S. special operations forces helped train Pakistani forces in counterterrorist tactics. U.S. officials on Wednesday disclosed a compromise deal to slash the number of U.S. military personnel allowed in Pakistan to between 100 and 150, about half of what it had been. The number of special operations trainers would fall from 140 to fewer than 10.