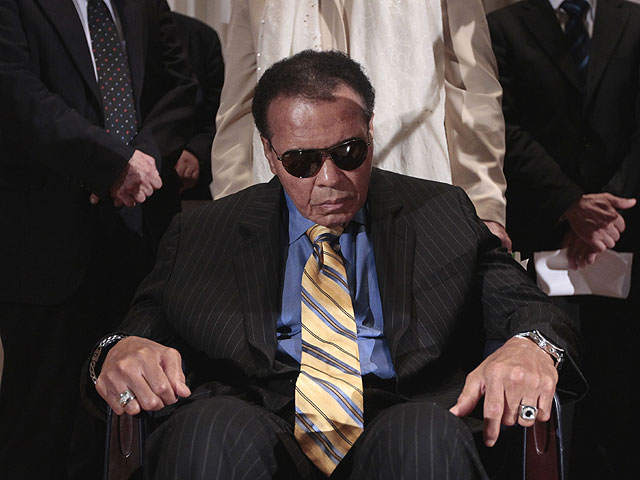 Ali did not speak Tuesday, but he led a prominent group of U.S. Muslims in appealing for the release of Shane Bauer and Josh Fattal.

Ali's wife, Lonnie, said the hikers are "citizens of the world." Like her husband, they sought to engage people worldwide despite cultural differences, she said.

The Americans have been held since being taken into custody along the Iran-Iraq border in July 2009. Bauer's fiancee, Sarah Shourd, was released on bail last year. She also pleaded for the pair's release.

Earlier Tuesday, a Foreign Ministry spokesman told Iranian state TV that calling them hikers is a "joke." The two Americans are charged with espionage. They deny the charges.

In March, Lonnie Ali said the boxing champ was willing to go to Iran to help make it happen. But she said such a visit would depend on her husband's health. Parkinson's Disease has limited his speech and physical activity.

"If we thought that they would be released and if Muhammad's presence would have some impact on that release for the good, then, yes, we would try very hard to make sure Muhammad was able to go," Lonnie Ali said. "But a lot of that, as you know, would depend on Muhammad's health. That's the bottom line."

Arguably the most prominent U.S. Muslim, Muhammad Ali made a behind-the scenes appeal to Ayatollah Ali Khamenei in February and released his letter to The Associated Press on Wednesday. The letter asks Khamenei to release Fattal and Bauer, who have been held on espionage charges since July 2009, when they were arrested while hiking in northern Iraq near the Iranian border.

FBI rescues over 200 trafficking victims, including 84 children
Thanks for reading CBS NEWS.
Create your free account or log in
for more features.
View CBS News In
CBS News App Open
Chrome Safari Continue
Be the first to know
Get browser notifications for breaking news, live events, and exclusive reporting.