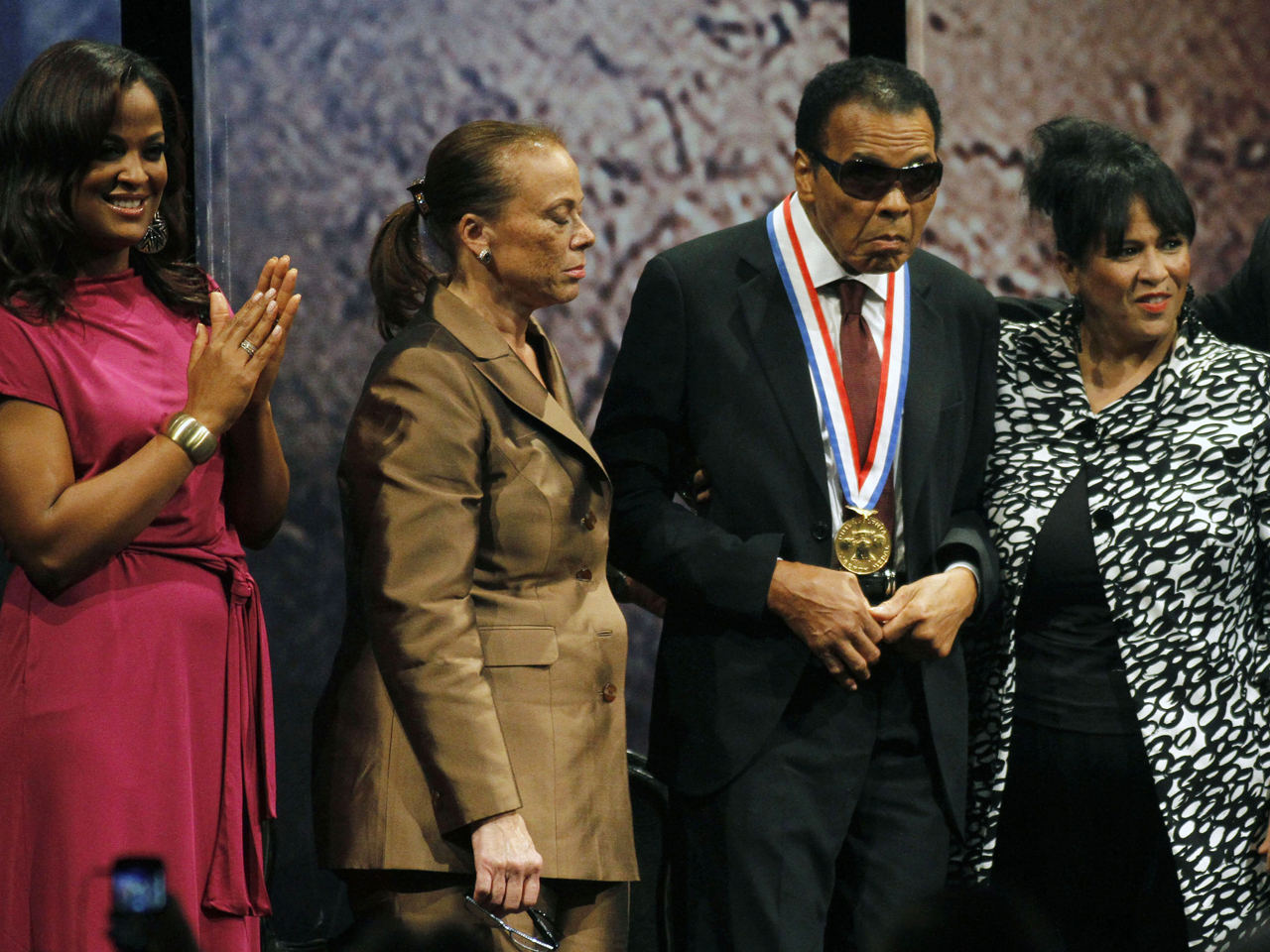 (CBS/AP) Retired boxing champ Muhammad Ali received the Liberty Medal for his longtime role as an advocate for humanitarian causes, civil rights and religious freedom on Thursday in Philadelphia.

Among those celebrating his latest honor at the National Constitution Center were former NBA star Dikembe Mutombo and Joe Louis Barrow II, the son of boxer Joe Louis.

"Knowing you since I was a little boy has given me a ringside seat to history," an emotional Barrow said. "But it's your character outside the ring that speaks to the hope of the least and lost among us."

The 70-year-old Ali, hobbled by a 30-year battle with Parkinson's disease, did not speak. But he stood with assistance to receive the medal from his daughter Laila Ali.

He looked down at his medal for several moments and then waved to the crowd. The award comes with a $100,000 cash prize.

Ali was born Cassius Clay but changed his name after converting to Islam in the 1960s. He refused to serve in the Vietnam War because of his religious beliefs and was stripped of his heavyweight crown in 1967. A U.S. Supreme Court ruling later cleared him of a draft evasion conviction, and he regained the boxing title in 1974 and again 1978.

One of his most famous fights took place in Zaire, now the Democratic Republic of the Congo, where he battled George Foreman in the "Rumble in the Jungle" in 1974.

At the ceremony Thursday, Mutombo recalled the impression Ali's visit made on him as an 8-year-old growing up in that country.

"He changed my life," said Mutombo, who also is a trustee of the Constitution Center. "I can never forget how inspired I was to see a black athlete receive such respect and admiration. He changed how the people of Zaire saw themselves, and in turn how the world saw them."

Since ending his boxing career in 1981, Ali has traveled extensively on international charitable missions and devoted his time to social causes.

Ali received the nation's highest civilian honor, the Presidential Medal of Freedom, in 2005. He also has established the Muhammad Ali Parkinson Research Center in Phoenix and a namesake educational and cultural institute in his hometown, Louisville, Ky.

The National Constitution Center, which opened in 2003, is dedicated to increasing public understanding of the Constitution and the ideas and values it represents. It awards the Liberty Medal annually to a person who displays courage and conviction while striving to secure freedom for people around the world.