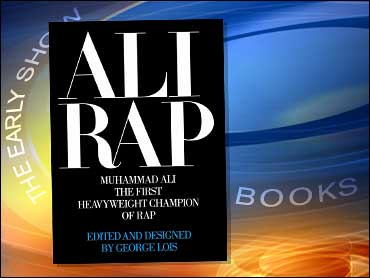 It was clear from the start that Muhammad Ali could talk as well as he could box.

Now, a book by legendary graphic designer George Lois uses Ali's words to suggest that he created the language of hip-hop.

It combines visuals with a lifetime of Ali's electrifying language in a biography that suggests Ali single-handedly invented the modern-day lyrical phenomenon.

On The Early Show Thursday, Lois told co-anchor Harry Smith, "In my book, I say, 'Before there was rap, there was Ali rap,' the jivvy jargon only Ali could have created. ... it was the essence of his spirituality, of his power, of his attitude, of his lyrics. People like Reggie Jackson said Ali pulled the black man out of mental slavery.

"It was the essence of what he was about that created rap. I never said he rapped, but he did, if you look at him on film. He rapped!"

Lois, who worked very closely with Ali, told of his first known "rap," when he was 13, and said of a boxing foe, "This guy is done. I'll stop him in one."

The words that go with the selected images are all Ali's, so it is, in effect, an autobiography, Lois pointed out, adding, "To me, the best way to do a tribute to Muhammad Ali was to use his words and use his wit. And if you read the book, it's the funniest book you've ever read in your life. But it gets very, very serious at times, and I think, by the time you get to the end of the book, I think it will bring a tear to your eye."

To watch the interview,