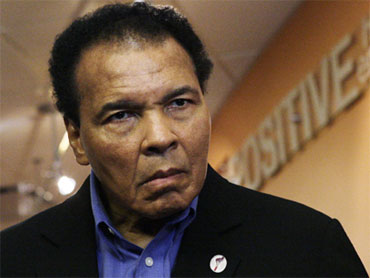 Muhammad Ali made a rare public appearance Thursday when he attended the opening of a newly expanded Phoenix institute that treats Parkinson's Disease.

Officials at the Muhammad Ali Parkinson Center say the facility is now the most comprehensive in the nation for the treatment of the brain disorder, which causes tremors, slowed movement, and muffled speech.

The former heavyweight champ, who lives with his wife Lonnie in the Phoenix suburb of Paradise Valley, put one hand on a pair of giant scissors to cut the red ribbon and officially open the expanded center.

Ali, 67, then toured it with Lonnie and his sister-in-law, who held his hands. The three stopped frequently to look at some of the most memorable images of himself in large frames along a hallway, including one of him towering over downed opponent Charles "Sonny" Liston.

"Look at this, Muhammad. That's a great photo of you," Lonnie told Ali, adding to others "this is a reflection of his life."

"I'm so excited for patients to come through this door," she said. "The environs are very comforting and calming and welcoming ... Just because you're in a hospital and you're here for treatment doesn't mean it has to look like a hospital."

The center has medical, rehabilitation, research, and social and educational services in one location. Center officials say the idea is for a Parkinson's patient to get all the services and treatment they need in one spot, instead of having to go to different locations.

Lonnie Ali said that's very important for people who have a tough time getting around, adding that it makes living day-to-day easier.

Center Director Abraham Lieberman said doctors and other staff there spend hours with new patients, explaining the disease to them and offering comfort.

"When they leave the office they're not scared out of their minds that they're going to be in a wheelchair or they're going to die or something terrible is going to happen to them," he said. "If you tell people the truth and you explain it carefully and people know what they're confronting, most people can deal with this. The trick is you have to spend a lot of time doing it."

He said he couldn't say enough about what Ali means to the center, especially for patients.

"I tell patients, 'Look, Muhammad Ali was the greatest athlete in the 20th century. He's got Parkinson's and he's not desperate, he's not dejected, he's not depressed,"' Lieberman said. "The center is named for him because he's such a recognizable figure and he's given so much inspiration to people."