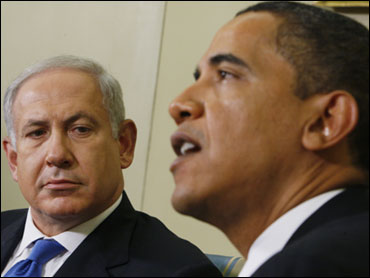 Elliott Abrams is a senior fellow for Middle East studies at the Council on Foreign Relations.


"Obama to Impose Terms on Israel" is the headline you didn't read on David Ignatius's column in the Washington Post today. The story ran under the title "Obama's Mideast Plan," which Ignatius describes as "proposing an American peace plan to resolve the Palestinian conflict."

But the substance is clear: It is a threat against Israel by the Obama administration and particularly by National Security Advisor James Jones. (The give-away is this line: "The fact that Obama is weighing the peace plan marks his growing confidence in Jones." Now who do you think was Ignatius's source for that gem?) Apparently Obama and his team are frustrated by their inability to get Israelis and Palestinians to negotiate a deal, and have therefore decided we'll just impose one.

The inability of Israelis and Palestinians to get to the negotiating table is, in this administration, an iatrogenic disease: Our diplomatic doctors have caused it. The astonishing incompetence of Obama and special envoy George Mitchell has now twice blown up talks-direct talks last year, and proximity talks more recently-by making Israeli construction plans a major world crisis, thereby forcing Palestinian leaders to back away from engagement with the Israelis. So the administration will, in the fall, just do it the simpler way. Why bother with Israelis and Palestinians, in whom the president apparently does not have "growing confidence," when you can just have your own brilliant team draw up the terms? As Ignatius's sources, "two top administration officials," tell him, "everyone knows the basic outlines of a peace deal."

This is false and dangerous. First, if indeed everyone has known the terms for nearly 20 years (since Oslo) yet agreement has never been reached, is it not obvious that neither Israelis nor Palestinians are willing and able to accept those terms? Does their embrace by an ambitious American president make them any more palatable to the people who will have to live with them? Second, the conclusion that all the terms are known is quite wrong. Is the fate of Jerusalem's Old City agreed? Do Palestinians accept that Israel will keep every major settlement bloc? Do Israelis and Palestinians agree on the terms needed to guarantee Israel's security once the IDF must leave the West Bank? (Examples: Is it agreed that Israel will control the air space and electromagnetic spectrum? Is it agreed that Israel can keep troops in the West Bank for some years? Do Palestinians accept that Israel can control the Jordan Valley and patrol the border with Jordan?)

This is nonsense. One of Ignatius's sources says the Obama plan will "take on the absolute requirements of Israeli security." After 14 months of harassment by Obama and his team, will any Israeli risk his nation's safety on that assurance?

A tell-tale: One of the demands that Obama is said to have made of Prime Minister Netanyahu is withdrawal to the pre-intifada (September 2000) IDF lines in the West Bank. This is striking, for the demand apparently is not to promise a future withdrawal, or a staged withdrawal as and when conditions permit, but simply to pull back now. This means ignoring security conditions on the ground and the current capabilities of Palestinian forces to keep order and stop terrorism, or it means assuming that the Palestinian forces are adequate. If they are not, well, so what, there will be a few acts of terror, and then we'll see that maybe they pulled back too far too fast. Everyone makes mistakes. These are the kinds of calculations that persuade Israelis the administration is cavalier about their security, despite the occasional repetition of campaign pledges to the contrary.

gnatius reports, approvingly, that Obama came to the conclusion that he should impose a "peace plan" after meeting with six former national security advisors. The first to suggest imposing terms on Israel was Brent Scowcroft; he was seconded by Zbigniew Brzezinski. This will not reassure Israelis. (Absent from his list of those attending, and approving, were Condoleezza Rice and Steve Hadley, George W. Bush's two NSAs. Perhaps this was mere accident; perhaps they are not invited to these festive events in Jones's office; perhaps they are too smart to lend their names to such White House games and the ensuing leaks.)

Perhaps this is all a trial balloon by Obama and Jones. If so, it will make Israeli-Palestinian negotiations even harder than they are today, after 14 months of Obama administration failures. For Palestinians will conclude that they have no reason to negotiate seriously, or to make concessions, when Obama may deliver what they want on a nice platter; and Israelis will conclude that Washington no longer takes their security seriously, so they must toughen their stance.

According to Ignatius, one senior official explained that "the American peace plan would be linked with the issue of confronting Iran," because "the issues are two halves of a single strategic problem" and "we have to get the debate away from settlements and East Jerusalem and take it to a 30,000 feet level that can involve, Jordan, Syria, and other countries in the region." There is a certain irony here, since the administration itself is wholly responsible for making "settlements and East Jerusalem" central issues right now. But read those quotes again. Phrases like "take it to a 30,000 feet level" are gibberish-a substitute for real analysis. There is no linkage to "confronting Iran," for weakening Israel and U.S.-Israel ties makes that harder. Yet an underlying Obama theme is audible here: The United States needs to get closer to Arab countries, needs to "engage," and Israel is in the way.

Ignatius begins his column by writing that "despite recent turbulence in U.S. relations with Israel," President Obama is considering trying to impose his own "peace plan." Where did "despite" come from?
By Elliot Abrams:
Reprinted with permission from The Weekly Standard