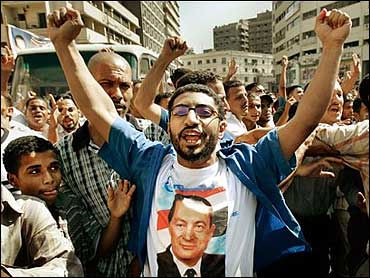 President Hosni Mubarak won Egypt's first contested presidential race, according to a preliminary count Thursday, an expected victory in a vote that was crucial to his claims of democratic reform but was marred by allegations of irregularities.

Mubarak took 78 percent to 80 percent of Wednesday's polling and opposition candidate Ayman Nour took 12 percent — a respectable showing for a relative unknown and one that could propel him to greater political prominence.

An official on the electoral commission gave the preliminary count to The Associated Press on condition of anonymity because he was not authorized to release the results. A final count was expected Friday.

Despite government promises of a clean race, reports were widespread of pressure and intimidation for voters to support Mubarak. The vote also was marred by low turnout. Nour demanded a rerun.

"After the grave violations that ... influenced the integrity of the election process ... we demanded out of concern national interest that elections be repeated," Nagui al-Ghatrifi, deputy head of Nour's al-Ghad Party, told reporters.

The 77-year-old Mubarak has ruled Egypt for 24 years, re-elected in referendums in which he was the only candidate.

The nation's first open race came amid Washington's push for greater democracy in the Middle East, and while a Mubarak win had been long forecast, the election process was, for many, more important than the results.

Cairo played down reports of irregularities, saying they did not diminish a major step toward reforms.

"There may be some comments, maybe some violations happened, but we have to agree that we're seeing an experience that we can build on for a future that realizes more freedom and more democracy in the Egyptian society," Information Minister Anas al-Fiqi told reporters after polls closed late Wednesday.

In Washington, State Department spokesman Sean McCormack said the Bush administration was following the election closely. He called the vote "a beginning."

Mubarak's government has said the contested election will open the door to more democratic reforms, but many have been skeptical he will really loosen his grip on power. Most major opposition parties boycotted the vote, saying he held an unfair advantage in the polls because of his government's domination of politics.

In one sign of the changes sweeping Egypt, more than 3,000 people marched through downtown Cairo to protest Mubarak — by far the largest crowd ever drawn by the group Kifaya, or "Enough" in Arabic. Police watched from a distance despite government vows to block protests. Two demonstrators were beaten by government supporters.

If that figure holds, and it turns out that 70 percent of the country's 32 million registered voters did not take part, it would indicate that most Egyptians did not have sufficient faith in the process.

While Wednesday's election did not see the violence and vote-rigging allegations of past contests, opposition party members, human rights monitors and voters told The Associated Press that people across the country were pressured, enticed or instructed to vote for Mubarak.

In Cairo and Alexandria, supporters of the ruling National Democratic Party promised food or money to poor people if they voted for Mubarak, voters said.

The Egyptian Organization for Human Rights, which formed a coalition with other groups to install poll monitors, said ruling party officials were allowed into some polling stations in Alexandria and forced voters to choose Mubarak.

In Beni Suef, 60 miles south of Cairo, party officials threatened to cut some people's monthly pensions if they didn't vote for the president, the group said. It said a party official in a poor Cairo neighborhood gave women nearly $10 each to vote for Mubarak.

In the southern town of Luxor, 300 miles from Cairo, university student Ahmed Mohammed Ahmed Ali said a poll worker told him he had to vote for Mubarak.

Osama Attawiya, spokesman for the country's election commission, said the panel had received no major complaints or reports of problems. Final results were expected late Thursday.