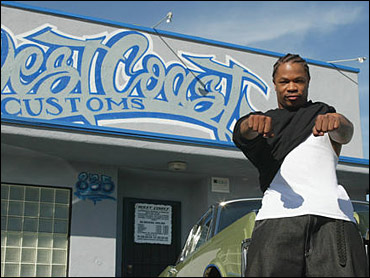 Turn on a television set at any given time and something is being made over: a room (TLC's "Trading Spaces"), a house ("ABC's Extreme Makeover: Home Edition") or even a human being (Fox's "The Swan").

But leave it to MTV — which ushered in the reality TV era more than a decade ago with "The Real World" — to put its own spin on the makeover show with "Pimp My Ride," a weekly series that transforms broken-down autos into tricked-out masterpieces.

The half-hour show, whose season finale airs Sunday at 9:30 p.m. EDT/PDT, has been a solid addition to MTV's lineup of original programming, consistently winning its time slot in the 12-to-34 demographic against basic cable competition.

"Everybody has had a bucket in their life," said Xzibit, using L.A. slang for a clunker. He has had two of his own rides — a Hummer H2 and a Mercedes-Benz S500 — "pimped" at West Coast Customs.

Xzibit said the show owes much of its success to the element of charity.

"It never gets old seeing somebody do something positive for somebody else," Xzibit said in a telephone interview. "The show is in such sharp contrast to every other reality show. It kind of fits the formula, but it serves another purpose. There's something positive being done at the end of every show."

A typical episode begins with Xzibit paying a surprise visit to the viewer and humorously highlighting the car's numerous problem areas. Then it's off to West Coast Customs, where a team of professionals disassembles the vehicle and completely refurbishes it with custom rims and paint, plush interiors and the latest in lighting, car audio and video accessories.

Believe it or not, there's more. Some of the special features vehicles have received include a ping-pong table in the bed of a 1985 Ford Ranger pickup truck, a motorized shoe rack in the trunk of a 1978 Cadillac Sedan DeVille and a remote-controlled digital camera in the passenger side visor so the owner of a 1989 Ford Mustang convertible could take pictures of her friends while driving.

Not only has the show been a winner for the network, it also has been so for West Coast Customs, which has seen an upturn in business since the show's debut in March.

"It has opened the door to do other things," said founder and owner Ryan Friedlinghaus, whose rep for outfitting rides for stars like Los Angeles Lakers star Shaquille O'Neal and rappers Ludacris and 50 Cent helped it land the show.

Each show ends with the car owner triumphantly returning home to the oohs and aahs of friends and family.

"It's not just about the cars anymore," Xzibit said, but also "the boost that these kids get in their self-esteem. You can see it in their faces."