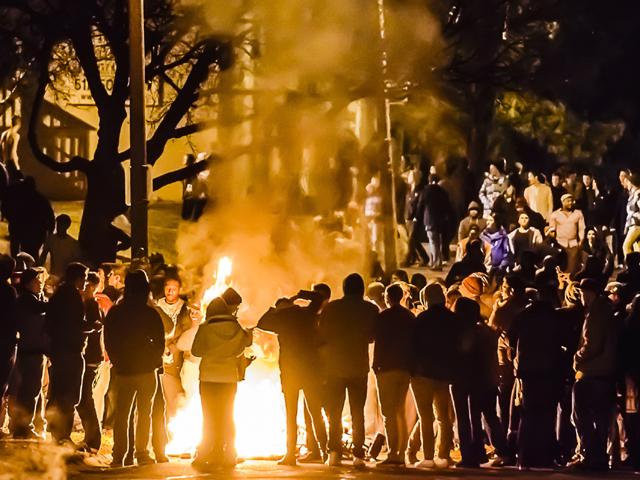 The No. 10 Spartans defeated No. 2 Ohio State 34-24 late Saturday, earning its first Rose Bowl appearance in a quarter-century.

Celebrants threw landscaping trees, a bicycle and fire extinguishers into a bonfire near the Cedar Village apartments and overturned a car outside other apartment, The Detroit News reported.

The bonfire flames reportedly reached 15 or 20 feet high as rioters fed the fire.

According to the Detroit Free Press, MSU athletic director Mark Hollis said, “People need to celebrate in a responsible way. I am proud of the performance of our football team. There is no place for destructive celebrations. I hope our fans and campus are safe.” Erika Gonzalez, 26, of Lansing, said eight people approached a red car near Milford Arms apartments and quickly flipped it on its top.

Officers surrounded another large fire about 2:30 a.m. Sunday and marched slowly down River Street to disperse the crowd.

"The behavior last night on campus and in East Lansing by both students and non-students was disappointing," said Simon. "Unfortunately, the behavior of a small number casts doubt on many.

Simon said investigators would review the incidents "and individuals will be held accountable. I ask that you join me in reinforcing that Spartans honor the success of our teams by celebrating with class."

"It seems to be the in thing for college students to do when they're out so-called 'celebrating,'" Ypsilanti fire Lt. Mike Kouba told MLive.com.