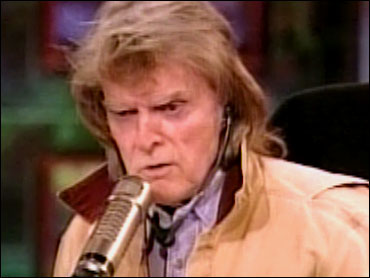 MSNBC said Wednesday it will drop its simulcast of the "Imus in the Morning" radio program. The decision comes amid growing outrage about radio host Don Imus' demeaning comments about the Rutgers women's basketball team.

"This decision comes as a result of an ongoing review process, which initially included the announcement of a suspension. It also takes into account many conversations with our own employees," NBC News said in a statement.

The announcement also was made on air.

Imus triggered the uproar on his April 4 show when he referred to the mostly black Rutgers women's basketball team as "nappy-headed hos." His comments have been widely denounced by civil rights and women's groups.

CBS Radio issued a statement saying it is sticking to its decision to suspend "Imus in the Morning" for two weeks, reports CBS News correspondent Anthony Mason.

But Bruce Gordon, a director of CBS Corp., and the former head of the NAACP, said Wednesday the broadcasting company needs a "zero tolerance policy" on racism and that Imus should be fired for his remarks.

The program originates from New York radio station WFAN and is syndicated to other radio stations by CBS Radio. Both, like CBSNews.com, are part of CBS Corp.

"He's crossed the line, he's violated our community," Gordon said in a telephone interview with The Associated Press. "He needs to face the consequence of that violation."

Gordon, a longtime telecommunications executive, stepped down in March after 19 months as head of the National Association for the Advancement of Colored People, one of the foremost U.S. civil rights organizations.

He said he had spoken with CBS chief executive Leslie Moonves and hoped the company, after reviewing the situation, would "make the smart decision" by firing Imus rather than letting him return to the air at the end of a two-week suspension that was announced Tuesday.

A CBS spokesman, Dana McClintock, declined comment on the remarks by Gordon, who is one of at least two minorities on the 13-member board.

Rutgers women's basketball coach C. Vivian Stringer said Wednesday night she was surprised at MSNBC's announcement, but heartened that the public had reacted so strongly against his comments.

Stringer, though, said the firing would not change plans for the players to meet with Imus in the future to discuss the comments.

"At no time were we trying to make a decision about whether he should be hired or fired," Stringer said in a telephone interview.

MSNBC's decision to drop the simulcast came after a growing list of sponsors — including American Express Co., Staples Inc., Procter & Gamble Co., and General Motors Corp. — said they were pulling ads from Imus' show for the indefinite future.

The 10 members of the Rutgers team spoke publicly for the first time Tuesday about the on-air comments, made the day after the team lost the NCAA championship game to Tennessee. Some of them wiped away tears as their coach, C. Vivian Stringer, criticized Imus for "racist and sexist remarks that are deplorable, despicable, abominable and unconscionable."

The women, eight of whom are black, agreed to meet with Imus privately next Tuesday and hear his explanation.

"We hope not only to let him know who we are as basketball players, but let us see the man behind the radio personality," team captain Essence Carson said on CBS News' The Early Show. "His remarks are completely not us, and we hope to see a man different, a man other than what his remarks proved him to be."

Under what circumstances would the players accept Imus' apology, asked co-anchor Hannah Storm.

"We haven't decided yet," Carson, a junior from Paterson, N.J., replied.

Stringer said late Wednesday that she did not call for Imus' firing, but was pleased with the decision by NBC executives.

Imus has apologized repeatedly for his comments. He said Tuesday he hadn't been thinking when making a joke that went "way too far." He also said that those who called for his firing without knowing him, his philanthropic work or what his show was about would be making an "ill-informed" choice.

But not everyone was calling for Imus to be fired.

"If you can't get redeemed once people make an inflammatory remark, then there are many people who shouldn't be in the public eye, not the least of which is Al Sharpton," media critic and new CBS News senior political correspondent Jeff Greenfield said Wednesday. But Imus "needs to get the point that some of the humor and the humor that some of us haven't called him on, needs to be changed."

Greenfield has been a guest on the Imus show, and was on it Tuesday.

"One of the reasons I would like to see him survive is that when the show is not indulging in bar room, locker room humor, it has an interesting focus on politics and public policy. What that show has lacked is black participants," Greenfield told Early Show co-anchor Julie Chen.

At the Rutgers campus in New Brunswick, N.J., about 300 students and faculty rallied earlier in the day to cheer for their team, which lost in the national championship game, and add their voices to the crescendo of calls for Imus' ouster. One of the speakers was Chidimma Acholonu, president of the campus chapter of the NAACP.

"This is not a battle against one man. This is a battle against a way of thought," she said. "Don Imus does not understand the power of his words, so it is our responsibility to remind him."