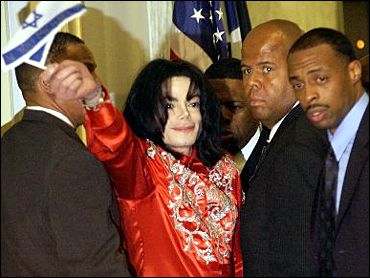 Michael Jackson is promoting the idea of staging a concert tour in Africa to help raise money to fight AIDS — if a California court where he faces child molestation charges will let him.

The entertainer never spoke, just blew kisses, as he was praised by members of Congress at a Capitol Hill news conference where he was the main attraction, reports CBS News Correspondent Bob Fuss.

"We are grateful to Mr. Jackson for bringing all of your attention to this critical issue," said Rep. Jesse Jackson, Jr. (D-Ill.).

Rep. Sheila Jackson Lee, D-Texas said the possible tour would be held in late May or early June.

"Michael Jackson will go to Africa on a specific basis of fighting the scourge of AIDS," she said.

"This man is going to lead the global effort" against AIDS, said Rep. Bobby Rush, D-Ill., as Jackson stood to his right, lightly bowing his head and smiling softly to a throng of reporters and photographers. "We need Michael Jackson to be that personality and to be that power to lead us to the Promised Land."

Jackson Lee said that during a meeting in her office, Jackson was invited by ambassadors from several African nations to tour their countries and help raise money for AIDS prevention, treatment and education programs.

Whether the tour will take place is in doubt, though. Jackson surrendered his passport after he was booked in November on child molestation charges and will have to ask a judge for permission to travel outside of the country.

Critics say his visit to the East Coast is an attempt to shore up his popularity in the face of his troubles on the West Coast where a grand jury is considering whether to indict him. However, Jackson does have a record of helping fight aids and he has been cited his philanthropy, reports CBS News Correspondent Thalia Assuras. He attended a BET reception in Washington and met with ambassadors from African nations.

Jackson has pleaded innocent to the seven counts of committing lewd or lascivious acts upon a child under age 14 and two counts of administering an intoxicating agent to the child. A pretrial hearing is scheduled for Friday.

Despite the charges, Jackson was met by loud screams, applause and chants of "Michael, Michael" from fans who waited to get a glimpse of him as he was hustled by bodyguards through the narrow hallway of a House office building.

Wearing a satiny red jacket, embroidered across the chest and sleeves with silver sequin brocade and bearing purple-sequined military-style stripes on the shoulders, Jackson met for more than an hour behind closed doors with a small group of black lawmakers and the African ambassadors.

Jackson was also scheduled to visit patients at Walter Reed Hospital, where many soldiers wounded in Iraq are being treated. An association of spouses of African ambassadors is scheduled to present him with a humanitarian award Thursday for his contributions to fighting AIDS in Africa.

While fans in Washington eagerly welcomed Jackson, leaders of the 38-member Congressional Black Caucus were less enthusiastic. They had turned down his request to attend its meeting Wednesday, saying they were too busy dealing with legislative issues affecting black Americans.