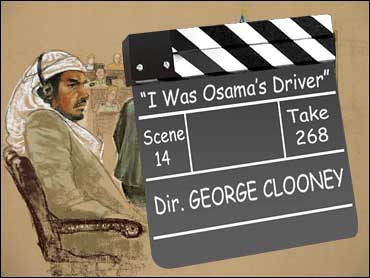 Of course George Clooney's production company has just purchased the rights to a book written about Salim Hamdan, the most famous mechanic and driver in the history of the world.

The sensitive star knows a good story when he sees one, and Hamdan's story (the final chapters of which have yet to be written) over the past six years surely ranks as one of the best of the decade.

Hamdan drove Osama bin Laden for a while (imaging having that passenger in the back seat looking over your shoulder), and two weeks ago the Yemeni national was convicted and sentenced for it.

The conduct and results of the trial now will be reviewed by our civilian courts in a process that could take years and yet another ruling from the United States Supreme Court. By that time, Hamdan could be free, or still in custody, or Lord knows what else.

Either way, what an extraordinary tale generated from such an ordinary man! I mean, Hamdan saw working for al Qaeda as a job opportunity, not a crusade. Khalid Sheik Mohammed later told his captors that Hamdan wasn't worthy of true terror activities, that such tactics were above Hamdan's station in life.

He never fired a shot at American troops, and even his military prosecutors were stymied in proving that Hamdan knew in advance about any terror plans.

Upon his capture, Hamdan confessed that he had once sworn a loyalty oath to bin Laden but then immediately cooperated with our soldiers, all the while insisting that he was innocent of being a terror "insider" with knowledge of and input into al Qaeda plans.

He was interrogated in a series of sessions that later helped convict him. So he became neither the least nor most culpable or dangerous man ever held in detention at Guantanamo Bay, Cuba. And his trial judge cut him a break with a sentence that could be completed within the year.

I can see it now: Clooney as the earnest military lawyer Charlie Swift, the former Navy JAG lawyer who represented Hamdan. Or perhaps New Blue Eyes wants to be Navy Captain Keith Allred, the stoic and, in the end, just military judge who saw the case against Hamdan for what it was and was not. Without the courage and integrity of both Swift and Allred, Hamdan would have been another nameless, faceless, hopeless detainee instead of being bold-face type in legal textbooks and index fodder for written histories on the post-9-11 phase of legal war on terrorism.

I can see in my mind's eye the film shot of Hamdan's interrogations after his capture or the shots of his introduction to Gitmo. I can see into the conference room at the Supreme Court where the justices are wrangling over the extent to which they ought to limit executive branch power. (Hey, Jason Alexander, are you ready to play Justice Antonin Scalia?)

And I can see the corridors of Congress and a bunch of bit actors playing politicians talking pompously about the Military Commissions Act of 2006, the short-sighted, lame-duck-passed legislation which only delayed the processing of the detainees out of Gitmo.

I can see the courtroom - no more Tom Cruise and Jack Nicholson, please - and the trial of Hamdan. It's "Law and Order" meets Kafka.

The trial we just witnessed - or didn't, because it was at a military base - including anonymous witnesses, classified evidence, a relatively articulate defendant (who didn't get along with his lawyer), and plenty of in-fighting among the prosecutors. All that was missing was a love interest and, hey, what's Hollywood for if it isn't to create a love interest in a story that doesn't have one? Maybe it's time to wake up Julia Roberts again.

How does the film end? No one knows, and that's the beauty of the narrative here. Even if Hamdan serves the rest of his sentence, the government still may choose to keep him detained (indefinitely!), a twist that even the writers for "Perry Mason" never would have considered. How do you think President McCain or President Obama will handle that matter next year? Maybe the production company should name the film "Crime and Punishment … And More Punishment"?

Clooney did a masterful job of drawing out the essence of the McCarthy Era in his classic story about Edward R. Murrow called "Good Night and Good Luck." It's easy to see how he could so the same with the tale of a completely obscure Middle Eastern guy who starts off measuring a dipstick in Afghanistan and ends up as one of the starkest symbols of the legal mistakes in policy and judgment made by the White House, Pentagon and Justice Department.

For all I care he can gather the entire cast from those Las Vegas movies they keep making. I'd like to see Carl Reiner play Dick Cheney.

If Clooney really does go ahead with this project, I hope his screenwriters include a full dose of the surrealism that soaks the Hamdan story. After all, the full fist of American power to this day has resulted only in the capture of the driver - but not the main passenger - of the Osamamobile.