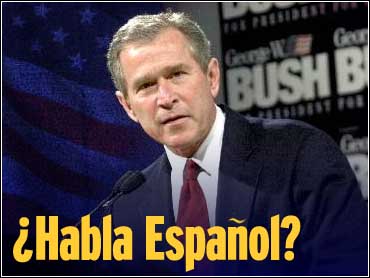 The Spanish-speaking announcer has a rich, comforting voice. He is booming his way through a 30-second ad spot.

The advertisement, featured prominently on the George W. Bush for President Internet site, touches briefly on the issue of education, but mainly sticks to generalities: Bush, the ad says - in Spanish of course - is the only candidate who knows a leader must lead all of the people. The boast is that, because the Texas governor is loose with the lingo, he's a better candidate.

But is the Texas governor truly fluent in Spanish, as so many outlets have reported?

In a denotative sense, the answer appears to be yes: Look up "fluent" in any dictionary and one will read a variation of the following: Fluent, adj.: Able to express oneself readily.

To be sure, the governor, who studied the language growing up, would have little trouble getting from the train station to the hotel in downtown Madrid or Mexico City without uttering any English. But could he read Marquez in the original Spanish? Could he write a synopsis of his tax-cut plan?

Here, the fluency boast loses a bit of steam.

"You know, he is pretty knowledgeable," says Bush campaign spokeswoman Sonia Colin. "I can't say that he's completely fluent, but he can read and write conversationally."

Rep. Henry Bonilla, R-Texas, a staunch ally of Bush whose congressional district stretches across miles of Tex-Mex borderland, told CBSNews.com "It seems, when people converse with him, he knows enough Spanish to get his message across. He certainly knows enough to communicate."

Bonilla, who rates himself as "90 percent fluent sometimes I forget a word" was quick to add that surveys show most Latinos preferring to communicate in English.

Others have their doubts about the depth of Dubya's ability to handle himself in Spanish, though they almost universally add as a caveat that ability is secondary to attitude.

"From all news reports, he seems to have some command of the Spanish language. But in terms of whether he can read it and write I have my doubts about his fluency," says Dr. Edward T. Rincon, a Dallas-based researcher who, among other things, advises Fortune 500 companies on the spending habits of America's 31 million Hispanics, 55 percent of whom live either in Texas or California.

Rincon adds that the majority of Hispanics living in the United States wouldn't bother calling themselves fluent, if one includes reading and writing in the definition. But for the Bush campaign, which views the Hispanic vote as critical, the imagery of a president fluent in Spanish has been a focus.

"His campaign has mad that a critical point," says Rincon, who has been critical of Bush gubernatorial administration in his writings. "But I don't how whether it's much of a big deal to Hispanics. It's no more important than the Chihuahua saying 'Yo quiero Taco Bell'."

"It's probably a good marketing ploy, to convey a sensibility," Rincon said. "But it does nothing to address the voting record of that candidate in issues that are important to the community. It becomes a moot point as to how much Spanish he knows."

R. Michael Alvarez, professor of political science at the California Institute of Technology, says no amount of Spanish will suffice to soothe Hispanic voters in California who are angry at initiatives pushed by ex-Governor Pete Wilson, especially one denying illegal immigrants governmental services (which became law but was subsequently ruled unconstitutional).

And while he says policy is more important that linguistic chops, Alvarez does give Bush some grudging respect. He recalls a 1976 incident in which Republican candidate Gerald Ford, campaigning in Austin, Texas, was offered a Mexican tamale - wrapped in a corn husk - to savor at a rally designed to court hispanic voters. But Ford, a man of other notable gaffes, didn't know enough to remove the husk before digging in to the savory meal it housed.

"He just puts the whole thing in his mouth and starts eating it, cornhusk and all," Alvarez said. "But I think that George W. Bush knows enough about Hispanic culture to take the husk from a tamale."

On Bush's language ability, however, Alvarez said "I don't think, if you stuck [Bush] into a debate that was being conducted entirely in Spanish, that he would be able to communicate at all. That's just my opinion."