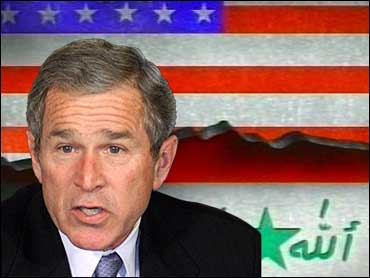 I'm afraid that your President and his advisors are doing no favours to the man who is America's staunchest ally. Our Prime Minister, Tony Blair, just back from his summer vacation, is facing a growing chorus of disapproval at the prospect of British troops being committed to an American invasion of Iraq. And Mr. Blair's mood must have darkened even more when he saw the reports of Donald Rumsfeld's attempt to compare George W Bush with Winston Churchill, and today's confrontation with Iraq with Europe before the second world war. If Mr. Rumsfeld wants to antagonise the British, then rewriting history is the right way to go about it. Don't get me wrong. We Brits are not particularly worried about anyone assuming the mantle of our wartime leader. It's been attempted before and will no doubt be tried again.

What concerns us is that Mr. Rumsfeld's confusion over some historical facts may not be the only thing that the current administration is getting wrong. Churchill was a soldier politician who fought for his country in the field and at one time ended up a Prisoner of War. Your President jumped the queue to get into the Texas National Guard, and strangely never made it to Vietnam. Churchill never advocated a preemptive attack on Germany after the rise of Hitler; he campaigned for increased defence.

Mr Bush, as far as we can understand, wants a preemptive attack on Iraq. He may still do it. But despite his reputation as a bit of a warmonger, it was Churchill who said, "Jaw jaw is better than war war". In other words, and now more than ever, keep on talking. To paraphrase the old man himself, many in this country and in Europe believe that never in the field of human conflict has so much military power been given to any one man so desperately reliant on such ill-informed advice. The great lesson of history is that no nation can act alone indefinitely.

Your President is pushing it.