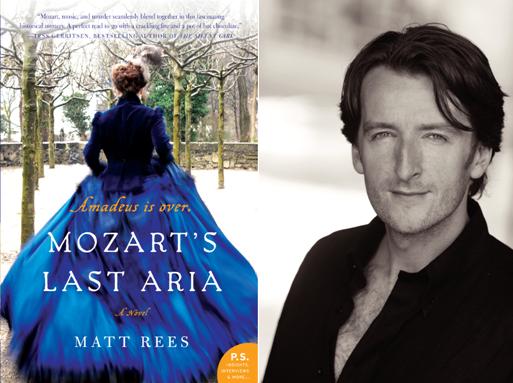 Jeff Glor: What inspired you to write the book? Matt Rees: I've always loved Mozart, but his music became more important to me when I was working as a foreign correspondent for Time magazine during the Palestinian intifada. The violence I witnessed and experienced disturbed me. I was in some ways traumatized. My reaction to trauma was to lose my temper to a crazy extent. When I listened to Mozart, I felt calmer. So I used to drive around the West Bank and Gaza listening to this beautiful music, not thinking about the killing and the threat that lay around the corner. I took a break from covering the intifada to visit Austria with my wife - we were looking for a place that was the anti-intifada, organized, peaceful and beautiful. We happened to pass through a small mountain village where, I learned, Mozart's sister, Nannerl had spent her married life. I visited her house and saw that she looked exactly like her brother. Naturally that got me thinking about plot opportunities. But I also felt called by her, as I stood at the edge of the lake at the bottom of her garden. Called by a talented woman who had been consigned to this backwater while her brother achieved fame in the Imperial capital. I wrote the book for her.

JG: What surprised you the most during the writing process? MR: I learned to play the piano so I could connect with the inner workings of Mozart's music, the structure, and the way in which great players prepare to perform his work. I had hoped this would take me deeper into his work, but even so I was surprised how well that technique worked. I spent a lot of time discussing performance with friends of mine who're classical musicians. It was invaluable to play Mozart's music, to hear it from within, as it were. Even with my pitiful technique, I was surprised at how clear Mozart's structure and aims were made by a little musical knowledge. So if anything surprised me in writing the book, I suppose it was that Mozart was an even greater genius than I had thought him to be before I started to work on "Mozart's Last Aria."

JG: What would you be doing if you weren't a writer? MR: If I wasn't writing, I think I'd be more than just a little bit dead. So the answer to your question is: I'd be decomposing quietly. Either that or, if I was lucky, I'd be teaching Ashtanga yoga and meditation. They're currently my great passions. I meditate and stand on my head before I write every day. It builds my concentration.

JG: What else are you reading right now? MR: I'm reading "The Quality of Mercy," Barry Unsworth's sequel (twenty years later) to his masterpiece "Sacred Hunger." Following up on that story of the slave trade, Unsworth looks at life among Britain's laboring classes 200 years ago and finds many parallels with slavery. Unsworth is a little over 80, and I just hope he lives forever. Each of his eclectic, historical books is worth 100 by anyone else now writing. At the same time, I'm re-reading "The Long Goodbye." I always turn to Raymond Chandler when I want a little inspiration. I make a point of reading all his books over again at some point during the year. No one paints an image like Chandler.

JG: What's next for you? MR: Just as I found a mystery in Mozart's demise, I came across a dubious end to my other favorite artist, the Italian painter Caravaggio. My novel about how he might've died (which is based on historical research and my own theories, just like "Mozart's Last Aria") is to be published in the UK in July as "A Name in Blood." I hope it'll be out in the U.S. later in the year. To write the book, I learned to paint with oils and to fight with a seventeenth-century rapier, and discovered I was better than I'd have expected at both. I also felt exactly how much cojones it must've taken for Caravaggio to fight with a rapier when the end wasn't blunted and he wasn't wearing a face-mask (because it can be pretty scary even when you are in all the protective gear.)