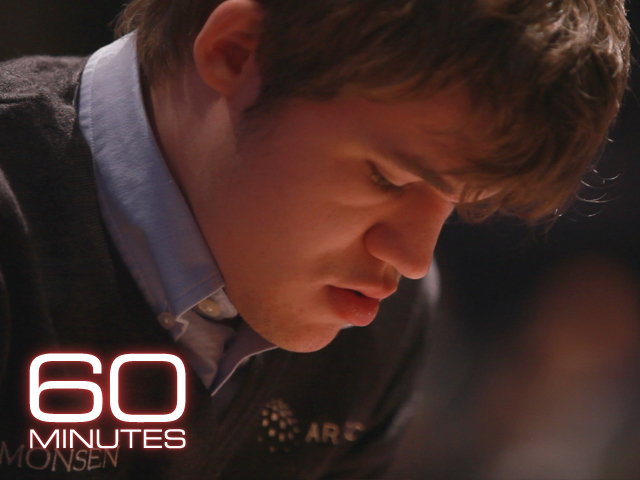 (CBS News) Demolition, not defeat, is the goal of 21-year-old Magnus Carlsen. No, he's not a boxer, not a wrestler. Rather, Magnus is the top chess player in the world, and he takes it on like an athlete. First, there's the tough physical workouts to prepare himself for the tough mental workout of competition. And then there's the attitude. Magnus, who comes from a nice Norwegian family, tells Bob Simon: "I enjoy it when I see my opponent really suffering, when he knows that I've outsmarted him." But really, he's a nice guy -- an athlete and fashion model in addition to being the top-ranked chess player in the world. Bob Simon profiles Magnus Carlsen.

The following is a script from "Mozart of Chess" which originally aired on Feb. 19, 2012 and was rebroadcast on July 8, 2012. Bob Simon is the correspondent. Michael Gavshon and Drew Magratten, producers.

Magnus Carlsen is the best in the world. He is a 21-year-old Norwegian, reigns supreme in a sport played by 500 million people. It is chess. Many don't think of it as a sport because nobody moves, but chess masters will tell you it can be more brutal than boxing. That's because at the championship level, the objective is not only to win, but to demolish your opponent. That can take hours, the best players need extraordinary endurance so most of them are young. Magnus is the youngest number one ever. And no one can explain to you how he does what he does. As we reported in February, it seems to come from another world, which is why he has become known as the Mozart of chess.

Just look at what he is doing: competing against 10 players simultaneously. That, in itself, is not extraordinary. But Magnus cannot see the boards. He is facing the other way. So he has to keep track of the positions of 320 pieces blind. And the number of possible moves? Infinite. Magnus comes out on top.

Bob Simon: That's the most amazing thing I've ever seen. Do you have any idea how extraordinary this looks to--

Magnus Carlsen: No. It's one of the amazing things in chess that you can-- you don't really need the board. You can just keep it--

Bob Simon: But it transcends chess. I mean, I just can't fathom what you've just done. It's just--

Last December, we caught up with him at the London Chess Classic. He arrives with his constant companion, his father. Magnus will play against eight other top ranked players. But he is the star as celebrated in this world as Eli Manning is in his.

Today, Magnus is playing America's number one, Hikaru Nakamura. The match will last four hours and there will be no breaks. Magnus will go on a stroll now and then. But his mind won't be going anywhere. He says he's concentrating not only on this game, but on other games played by other masters at other times which he might want to draw on now. Ten thousand of them. We gave him a test.

Magnus Carlsen: It was played right here in London. Simpson's on the Strand in 1859. I don't know the month or day.

Simon: You got it wrong.

Magnus Carlsen: It's not what it used to be.

Chess players are pretty pokerfaced. But occasionally Magnus will flash the smile of someone who knows it's all over but the handshake while Nakamura dives deeper into doom. Magnus was playing brilliantly and he knew it.

Simon: Is there anything in life more satisfying than that feeling when you're playing brilliantly?

Magnus Carlsen: I don't know. But it's really, you know, up there.

The spectators seem as mesmerized as the competitors. They're all chess players, of course. If they weren't, it would be like watching paint dry. Worldwide, a hundred thousand are watching on their computers. The suspense keeps building until end game by which time, it's cutthroat.

Simon: Do you enjoy it when you see your opponent squirm?

Magnus Carlsen: Yes. I do. I enjoy it when I see my opponent, you know, really suffering when he knows that I've outsmarted him. If I lose just one game, then usually, you know, I just want to really get revenge.

For 50 years, chess was war. It was a battleground in the Cold War with the Russians who were dominant. But then an American came along. His name was Bobby Fischer. In 1972, he took on the Russian champion Boris Spassky and he won. It was an international spectacle.

And the enthusiasm has not waned. Back in London, just down the corridor from where Magnus is playing, 500 novices are learning how to master kings and queens.

Simon: Do you ever play any grownups?

Kid #1: Yes. Yep, I do play grownups. In fact, I'm getting the hang of playing grownups.

Simon: Who's your favorite chess player?

Chess is now routinely taught in schools all over the world, including the United States. In some countries it is compulsory.

Chess can be taught, but not genius. Magnus seemed like a normal enough kid growing up outside Oslo, but wait a minute when he was five he could name almost all the countries in the world and their capitals and their populations.

Henrik Carlsen: He did have a good memory and the ability to concentrate for hours at the time on the specific topic. And he seemed to be interested in a lot of things. New things all the time. But I thought that was normal.

What got him into chess? Sibling rivalry. His older sister started to play so he wanted to beat her. Which he did, quickly.

Then he started winning tournaments. Before long, he became a celebrity, one of the first Norwegians to excel in a sport that did not involve snow.

People lined up in shopping malls to play him. When he won, Magnus said it was just a game, no big deal. He couldn't understand why people were making such a fuss.

[Magnus Carlsen: Why does - why do all people want to talk to little me?]

Magnus's parents took him and his sisters out of school for a year, rented out their house, sold their car. It was part holiday, mostly chess. They went to Reykjavik, Iceland which is where Magnus took a leap into legend when he was matched against Garry Kasparov, the Russian, considered by many to be the greatest ever. And how did Magnus prepare? By reading up.

Kasparov kept the 13-year-old kid waiting for half an hour and when he did arrive, he didn't even say hello.

It was speed chess, the formula one of the sport, a race against the clock.

Magnus Carlsen: I sat there for a few seconds and then I thought to myself, "You know what? I don't know why he's thinking. But I know what my response is going to be anyway. So I'll just walk off and watch the other games."

Kasparov had never played anyone so young. But he did not exude confidence or happiness. And he did not win. Magnus played him to a draw. It was a sensation. Kasparov left quickly. No "nice game, kid." Nothing.

How did Magnus react? Guess. He thought he had blown it.

Magnus Carlsen: When I actually got to winning position I had little time, I was nervous, and I couldn't finish him off.

Simon: Why were you nervous?

Magnus Carlsen: I was playing Kasparov. I was intimidated.

Simon: You were intimidated by playing the world's champion when you were already 13 years old?

It warranted a celebration, of course, and Magnus got to choose.

Magnus Carlsen: Yes. I went to my family-- I went with my family and had some ice cream at McDonald's.

By the time he was nineteen, the boy with the ice cream had become number one in the world.

Frederic Friedel: He has a very deep understanding of chess.

Simon: Is this an indication of genius?

Friedel: Of genius and raw talent. Now, Magnus has-- still hasn't reached his peak. He hasn't really worked yet.

Simon: I've heard him described as lazy, which I find quite extraordinary.

Friedel: I mean, that's an impolite term, but it's probably appropriate.

Except when he's not. Magnus plays soccer whenever he can break away from the board, he's got a mean backhand and he is also moonlighting as a model. There's never been much money in chess, but Magnus is changing that. Sponsors are lining up to endorse him. He's making about a million and a half dollars a year.

But it's a solitary life. Magnus is on the road two hundred days a year now. Between matches he is alone in his hotel room getting ready for tomorrow's game. He works out almost every day...knows he can't concentrate for what's often seven hours unless he's in shape. Magnus says he wouldn't be able to tolerate this life if it weren't for his father who is always there for him.

Simon: When you travel with Magnus, what's your role?

Henrik Carlsen: I'm a servant. And a chess fan.

Simon: You enjoy the games?

And so, he says, does Magnus.

Henrik Carlsen: It should. Maybe you have to compare it to a writer or a painter. I mean, probably if you see them at work, they're not smiling or having an easy time. They're exploiting their mind to the utmost. And the same with the chess players.

But that level of concentration is not danger free. A fair number of grandmasters have gone mad, which is what happened to Bobby Fischer in his later years.

Simon: Do you ever think about that?

Magnus Carlsen: Yes. I do. And that's you know, when I was watching the recent film about Bobby Fischer I was thinking, you know, is this going to be me in a few years? I don't think that's going to happen. But, you know, it made me think a little bit that, you know, I have to be aware of this, at least.

Simon: People have described you as the Mozart of Chess. How do you react to that?

Magnus Carlsen: Yeah. Maybe. But was Mozart ever asked how he does this? I don't-- I would be very impressed if he had a good answer to that. Because I think what he would say is that just-- it just comes natural to me. It's what I do.

Simon: Which is what you say?

It's what he does for fun, too. . .at the Oslo chess club where he started. He is playing a Norwegian grandmaster here. It's called Bullet chess and Magnus has a handicap. His opponent is given three minutes to make his moves. Magnus has one. It's just a friendly match. But Magnus always hates to lose so he doesn't.

Simon: You got him?

Magnus Carlsen: Yeah, I got him.