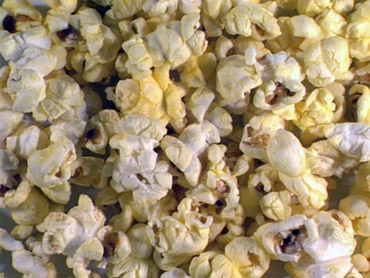 Ordering a medium popcorn and soda combo from a major national movie theater chain is the equivalent of eating three McDonald's Quarter Pounders with 12 pats of butter, according to a new study by the Center for Science in the Public Interest.

According to laboratory analysis conducted by the Center for Science and Public Interest (CSPI), the concessions from Regal, the country's biggest movie chain, have 1,160 calories and three days worth - 60 grams - of fat. Regal said that the medium popcorn had 720 calories and the large had 960, but CSPI's tests found those numbers to be understated. A small popcorn at Regal had 670 calories - the same as a Pizza Hut Personal Pepperoni Pan Pizza. Even if you share a small popcorn - it's still about a day's worth of saturated fat per person, according to CSPI.

"It's hard enough for Americans to maintain a healthy weight even when limiting their eating to breakfast, lunch, and dinner," said CSPI senior nutritionist Jayne Hurley. "Who realizes that they might be taking in a meal's worth of calories during a movie? Splitting a medium popcorn with two other people sounds like a reasonable thing to do, but who would think they're getting an entire day's worth of saturated fat?"

The study is published in December's Nutrition Action Healthletter, and updates research CSPI conducted 15 years ago.

George Dunn, the President and COO of Regal Entertainment Group, said that when CSPI released a similar study in 1994, Regal responded by offering healthier choices like air-popped popcorn, but that they weren't popular with customers.

"According to the most recent statistics from the Motion Picture Association of America, the average American attends six movies a year," Dunn said. "Theater popcorn and movie snacks are viewed as a treat and not intended to be part of a regular diet."

While Cinemark's popcorn had far less saturated fat - 2 grams - it had the highest amount of sodium, 1,500 milligrams, which is a day's allowance for most people. But at some Cinemark locations, the butter topping is made with real butter, adding 18 grams of saturated fat.

CSPI warns not to indulge in sodas or candy either. A 8-ounce bag of Reese's Pieces had 1,160 calories and 35 grams of saturated fat, making it comparable to eating a 16-ounce T-bone steak and a buttered baked potato.

"Sitting in the dark, absorbed by a movie, we pay no attention to what we're eating-and movie theater chains are offering only bad choices at bad prices," said Hurley. "The healthiest snack to buy at the movies is no snack at all."