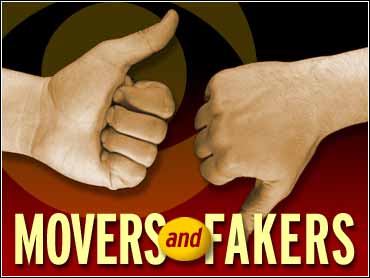 Movers and Fakers keeps you up to date on political shenanigans in the nation's capital, around the country and around the world. Compiled by CBSNews.com's Steve Chaggaris.

Secret Service Dog In Doghousesize>color>
A bomb-sniffing Secret Service dog has landed in the public doghouse after biting a landscaper near the Jackson, Wyoming, area home of Vice President Dick Cheney.

Employees of Alpine Landscape had regularly gone through the Secret Service checkpoint in the Teton Pines neighborhood, with agents and dogs checking the vehicles each time.

The routine was altered recently when one dog, Brix Brix, bit the arm of Alpine Landscape employee Cash Hawkins.

"Hawkins had his arm on the window and had the window open," Alpine Landscape owner Gene Williams said. "The officer tapped the cab and the dog attacked him."

Hawkins was treated at a Jackson hospital, with the Secret Service picking up the undisclosed tab. Williams described Hawkins' arm as "black from his elbow to his shoulder."

Agent Tony Ball, a spokesman for the service, said the incident was being investigated.

"We're definitely not talking about any disciplinary action with the dog or the trainer," he said.

Retiring To Hollywood?size>color>
If Sen. Phil Gramm, R-Texas, is wondering what he's going to do after he leaves the Senate, perhaps he'll consider a career in Hollywood.

Gramm, who announced last week he won't seek re-election in 2002, is slated to appear in the Civil War movie "Gods and Generals" being filmed in Maryland and Virginia, reports the San Antonio Express-News.

The senator's spokesman Larry Neal told the newspaper Friday that Gramm will appear as a Southern soldier in the movie, which stars Robert Duvall, Jeff Daniels and Mira Sorvino.

Jeffords' Fame Isn't Fleetingsize>color>
It's been months since Sen. Jim Jeffords, I-Vt., altered the balance of the Senate by bolting the GOP. And it seems because of his party switch, Jeffords is still in the spotlight, according to the newspaper, Roll Call.

The senator now has a book deal and a Vermont beer named after him, called "Jeezum Jim."

And a weekly newspaper in his home state, Seven Days, is currently running a contest for readers who are "frequently confused with Vermont's switcheroo Senator."

Whoever looks most like Jeffords will win "FREE round-trip bus tickets to Rutland in Jim Jeffords' home county."

Jeffords spokesman Erik Smulson figured out that the top prize really isn't that great, however.

© MMI, CBS Worldwide Inc. All Rights Reserved.. This material may not be published, broadcast, rewritten, or redistributed. The Associated Press and Reuters Limited contributed to this report